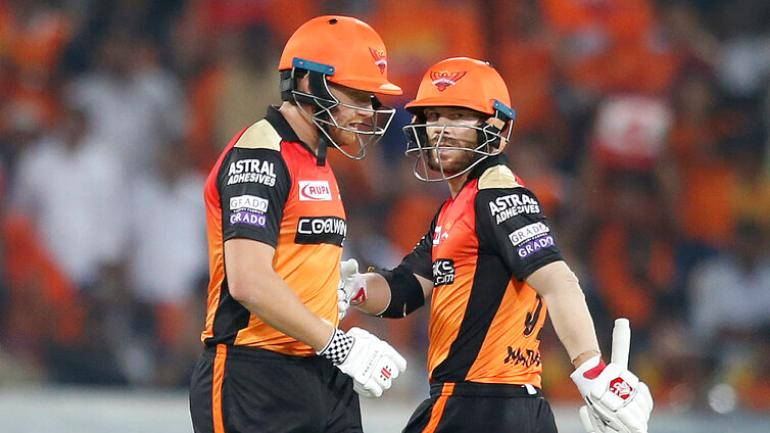 The Indian Premier League has seen terrific displays of partnerships over the years and some have been defined among the best in Twenty20 cricket. Twenty20, the shortest format of the game is inherently batsmen-friendly. Let us take a look at the best partnerships in IPL history.

What is the Highest Opening Partnership in IPL?

The record of the highest opening partnership in IPL is held by Jonny Bairstow and David Warner.

Which is the Highest Partnership by Two Indian Batsmen in IPL history?

Virat Kohli and AB de Villiers hold the record for the highest partnership in the history of the IPL.

This partnership is indeed the best partnership in IPL history. It showed off sheer dominance from Virat Kohli and AB de Villiers and it was against the Gujarat Lions.

On 14th May 2016 despite playing under the hot conditions in Bangalore, the duo barely broke a sweat as they dispatched the bowling attack to all parts of the ground.

Kohli scored 109 in that game while de Villiers remained unbeaten on 129.

Kohli and AB de Villiers have been part of some of the most amazing partnerships in IPL history.

In 2015 once again, Virat Kohli and AB de Villiers pulled off a stunning best partnership in IPL history.

They have repeatedly showcased to the entire world that they are every bowler’s worst nightmare.

The game was against the Mumbai Indians in Wankhede Stadium, Mumbai where Kohli and de Villiers scored 82 and 133 respectively, as they conjured up an unbeaten partnership of 215 runs.

AB de Villiers demolished the bowling attack and reached an astonishing score of 133 in just 59 balls. Kohli finished on 82 off 50 deliveries.

The score read 235/1. Despite Mumbai Indian’s best efforts, they could only reach 196 runs.

In May 2011, Dharamshala witnessed a breathtaking assault as Adam Gilchrist scored 106 off 55 balls with nine maximums including a 122m six against Charles Langeveldt.

This is the third best partnership in IPL history.

Shaun Marsh continued his good form and remained unbeaten on 79. The Australian duo, while representing the Kings XI Punjab, put on 206 runs for the second wicket.

This time Royal Challengers Bangalore was on the receiving end as Gilchrist and Marsh smashed the bowlers to all parts of the pleasing Dharamshala ground.

Royal Challengers Bangalore crumbled in the chase thanks to Piyush Chawla’s four-wicket haul and fell short by 111 runs.

Virat Kohli and Chris Gayle hold the record for the fourth-highest partnership in IPL history.

Gayle and Kohli remained unbeaten on 128 and 73 respectively as Royal Challengers Bangalore beat the Delhi Capitals by 21 runs with Ross Taylor being the only one to score a 50 for Delhi.

Gayle smashed 128 runs not out off 62 balls, in an innings consisting of 13 maximums and seven boundaries while Kohli, coming in to bat at number three, scored 73 off just 53 deliveries.

In 2012 David Warner and Naman Ojha were involved in a stunning unbeaten best partnership in IPL history of 189 runs.

After being set a target of 187, thanks to the performances of Shikhar Dhawan and Cameron White for the Deccan Chargers.

Chasing 188 runs to win, Delhi Daredevils got off to an awful start as they lost skipper Virender Sehwag early. Warner was not ready to look back.

David Warner was supported by Ojha to give assured innings. Delhi Daredevils brought up their victory in the 17th over.

David Warner won the orange cap in IPL 2019, scoring 692 runs from just 12 matches. England wicketkeeper-batsman Jonny Bairstow, in his first IPL season, impressed one and all.

Warner and Bairstow were at their best against the Royal Challengers Bangalore.

Both of them raced to their respective hundreds, helping Sunrisers Hyderabad secure a huge 118-run win over Virat Kohli-led Royal Challengers Bangalore.

Playing against the Gujarat Lions in IPL 2017 in Rajkot, the duo amassed an unbeaten 184 run stand for the 1st wicket. They helped their side thump the opposition by 10 wickets.

Gautam Gambhir was also involved in another 150-plus stand earlier in the 2011 edition.

Kings XI Punjab openers KL Rahul and Mayank Agarwal brought up the third-highest opening partnership in the history of the Indian Premier League.

In the list of the best Partnership in IPL History, they added 183 runs for the first wicket against Rajasthan Royals in Sharjah on  27 September 2020.

Chennai Super Kings were chasing a stiff target of 179 runs at the Dubai International Stadium with Watson and du Plessis coming out to start their run-chase.

The Australian cricketer Watson punished the Kings XI Punjab bowlers with 11 fours and three sixes in his 53-ball unbeaten knock while Du Plessis hit 11 fours and a six from 53 balls to also remain not out.

The last partner in Best Partnership in IPL History list is Sunrisers Hyderabad, who pulled off their highest chase as they got to 188 against Delhi Daredevils in Match IPL 2018.

Sunrisers Hyderabad became the first team to qualify for the Playoffs in 2018.

Kane Williamson and Shikhar Dhawan eased to a 173-run match-winning partnership to win it for SRH by 9 wickets, with 7 balls to spare.