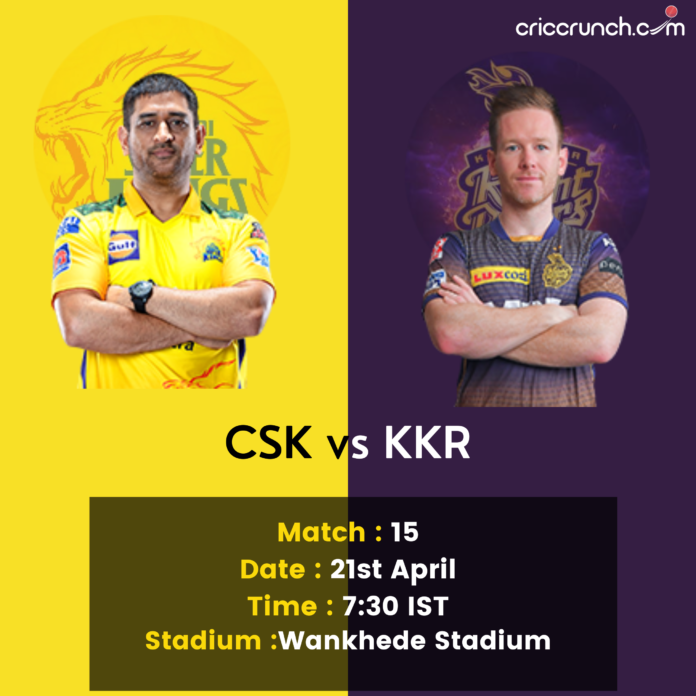 IPL 2021, MATCH 15 between CSK VS KKR was an absolute thriller with many tense moments in between the match.

Captain dhoni always has his backup strategies and knows well how to get good performance from his team under pressure as well as how to get his players back on track when they are going off-guard.

This season IPL has been quite interesting so far with so many unpredictable wins and losses.

Today’s IPL Match is between the teams with contrasting fortunes in the 2021 IPL and KIngs are leading the Knight Riders by 15-9.

Let’s begin with the match review and discover how thrilling it is for its fans.

TOSS: KKR has won the toss and opted to field.

CSK ON BAT & RIDERS BEGINS WITH THE BALL.

The game is on with a good start, Ruturaj and Faf Du Plessis are on bats, and Chakravarthy from the KKR team on the attack.

The scoreboard shows a score of 19/0 after 2 overs.

Ruturaj and Faf’s good start and partnership helped the former to reach his FIFTY after the end of 11 overs.

This duo got many beautifully played boundaries in their pocket for this evening. They both are going well with no wicket loss and 115 runs till the end of 12 overs.

AND it’s Caught OUT!! Ruturaj was sent back in the over by Chakravarty.

CSK is up for a good finish with a score of 121 runs and a wicket after 13 overs. Now let’s see if any magic from KKR can Keep them below 200.

MSD joins the crease after Moen Ali gets stumped by Karthik on a ball by Narine.

After giving back-to-back boundaries to Plessis in the 19th over, Russell got Dhoni’s wicket in the last ball of the same over.

Ravindra Jadeja walks in and the score Update of CSK is 201/3.

The last over was amazing with two sixes in the middle of this over by Plessis, Jadeja finishes off the innings in style with his striking SIX.

KKR is back for the chase and innings begins with Nitish Rana and Shubham Gill from the team to open the crease.

Deepak Chahar is opening the attack from the yellow team.

The match begins with an OUT….Yes, you read it right. Shubham gill was caught Out on the Fourth ball of the very first over by Chahar.

Seems Chahar is on Fire today and it’s again OUT!! Nitish Rana was swept away with a fine and safe catch by Dhoni.

KKR at a score of 17 runs with the loss of two wickets in just 3 overs.

OMG…This man is Playing Crazy today, Chahar got two more wickets this evening and which means KKR loses its four wickets after 5 overs.

Russell after having 9 boundaries including 3 FOUR’s and 6 SIX’s Russell departs from the ground with 54 runs. He only helped KKR to get back in the match after losing most wickets in the first five overs.

After Russel’s wicket, Karthik keeps the charge going on. His innings of 40 runs of 24 balls helped in the stability of the score for KKR.

Pat Cummins really made the match interesting in the last overs. His wonderful destructive shots gave a little hope to KKR Fans. He was standing as a hurdle between CSK Team and WIn.

But he couldn’t save the match because of pressure and CSK pulled off the match in the end.

Man of the Match