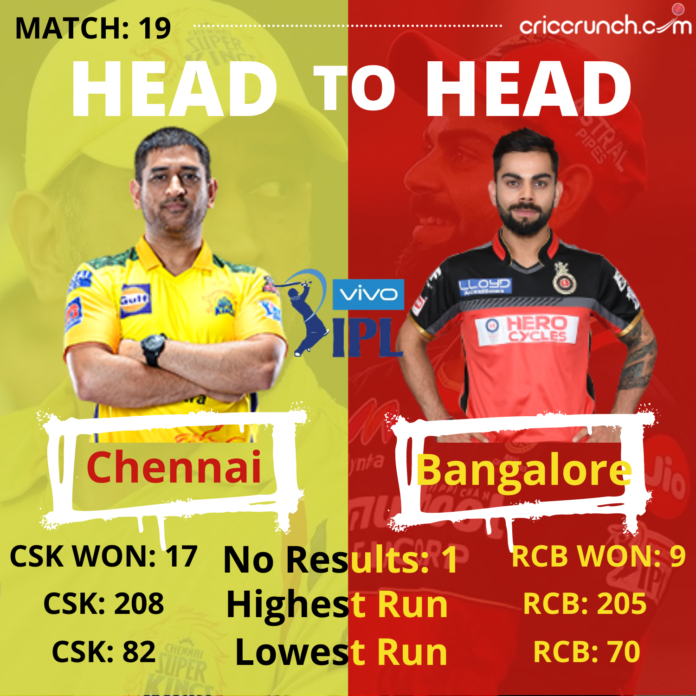 IPL 2021 season’s 19th Match between two of the Top Teams, CSK vs RCB.This is one of the most awaited matches of IPL. Field Fight between Former and Current Captain of Team India.

RCB has a very good start in this season IPL with four consecutive wins, CSK on the other hand is also playing strong after their opening loss to DC. They are currently ranking 2nd in IPL standings behind RCB, who are leading the same with 8 points on the number 1 position.

Let’s Begin with this interesting match review and get to know more interesting turns and twists of this match.

To begin the action Ruturaj Gaikwad and Faf du Plessis opened the match on the ball by Mohammed Siraj from RCB.

A wonderful powerplay by CSK with a good number of boundaries in the first six overs and a great partnership of this duo Gaikwad and Plessis, Score is 51 runs for no loss.

CSK was doing well and the match was going smooth till Chahar came to break the chain and partnership. Gaikwad was sent back to the pavilion on the very first ball of the 10th over.

Faf is doing well in this IPL season and here’s another 50 added in his Records.

Harshal Took the two important wickets of this match in the same over. Both Raina and Faf were caught out leaving CSK at a score of 111 runs and a loss of 3 wickets by the end of 14 overs.

Ravindra Jadeja on bat now along with Ambati Rayudu.

It’s Another One for Harshal Patel, with his third wicket of this match and a good spell sends Rayudu back from the ground.

Captain MS. Dhoni joins in the 18th over.

It seems Jadeja has something else in mind and with his wonderful cameo, he just changed the complete match in the last over.

With his smoking Sixes on the balls by Harshal Patel in the last over, Jadeja played a great inning with completing his FIFTY in just 25 balls.

THE FIRST INNINGS IS OVER WITH A REMARKABLE FINISH BY JADEJA.

Captain Virat Kohli and Devdutt Padikkal are in the crease with Deepak Chahar opening for CSK.

A Neat and bright start by RCB leaves them on a score of 10 runs after the finish of 1st over.

The duo was trying to make most of the Powerplay but two major wickets in the first five overs shattered RCB fans. Yes, Captain Kohli and Padikkal were sent back, and the Score after their wickets and finish of fifth over is 54 runs.

WOW!! Jadeja is playing a fantastic game today. Its another wicket for RCB by Jadeja

The score is 68/3 after the loss of Washington’s wicket in the seventh over.

It seems stars are on the CSK side today, With De Villers and Maxwell Playing, Jadeja took another huge Wicket of Maxwell in the Ninth over.

With few runs in the next 4 overs and a slow ending, RCB lost it

CSK vs RCB Most Wickets

Match man of the match

CSK vs RCB MOST SIXES