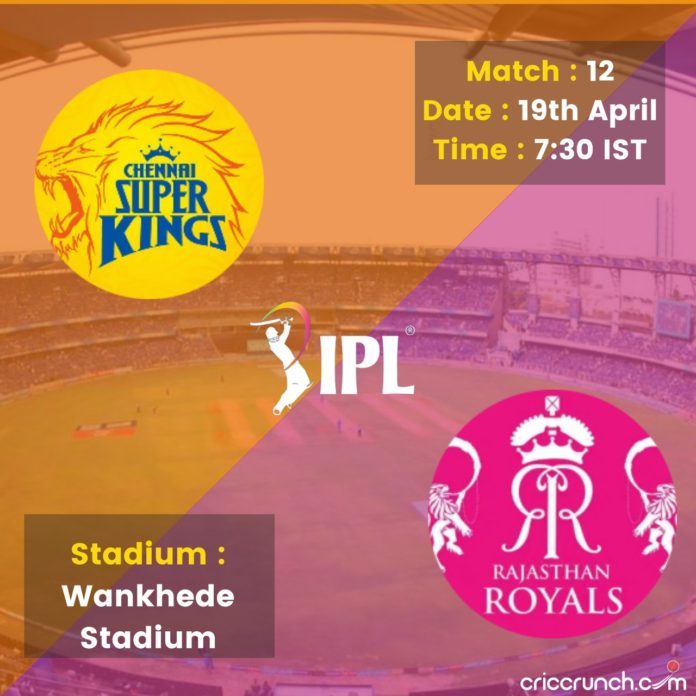 After Both teams had won their last match with a smashing win. Both of them were looking for another outstanding win.

RR got a major setback when Ben Stokes ruled out of the tournament due to a finger injury. Jofra Archer is also in the early stages of his training. We can expect a high-scoring match on this Wankhede pitch, given both team’s deep batting lineups.

Toss: Rajasthan Royals won the toss and chose to bowl

The inning was led by Ruturaj Gaikwad, and du Plessis. Unadkat, who was lethal in the previous game, led the pace attack.

Throughout this tournament, Gaikwad’s struggled to get runs. He continued as Mustafizur got him out in the 4th over.

The cameo of Faf du Plessis aided CSK in the power play. He made 33 runs in just 17 balls.

After Faf, the appearance of Moeen Ali, Suresh Raina, and Ambati Rayudu also helped CSK in acquiring a big score on this bowling pitch.

MS Dhoni failed to end the innings once more. His struggles in death overs disappointed the thalaiva fans.

CSK’s batsmen were unable to form a partnership against RR’s bowling strategy. In the end, Bravo helped CSK to reach a decent total.

Buttler and Vohra are the ones who led the chase. The speed attack was led by Chahar, who had been destructive in the previous game.

Both openers were using the powerplay at a nice run rate. Vohra has struggled in this season. He leads off his batting with a couple of incredible shots but instantly loses his wicket.

Sanju Samson also got out just after Vohra. Sam Curran did fantastic bowling in the powerplay by getting two wickets.

RR made 45 runs for the loss of 2 wickets in the powerplay.

Buttler was hitting the ball brilliantly. He was crucial in this match, and RR needed him to bat until the end and hold the innings. He got bowled, one run short of the 50-run mark. Jadeja got the big fish.

A fantastic inning of 49 runs in 35 balls ends so soon.

Jadeja was all over the place through his beautiful fielding, catching, and bowling.

In the end, no one was able to reach the target in front of CSK’s bowling lineup.

Man of the Match: Moeen Ali