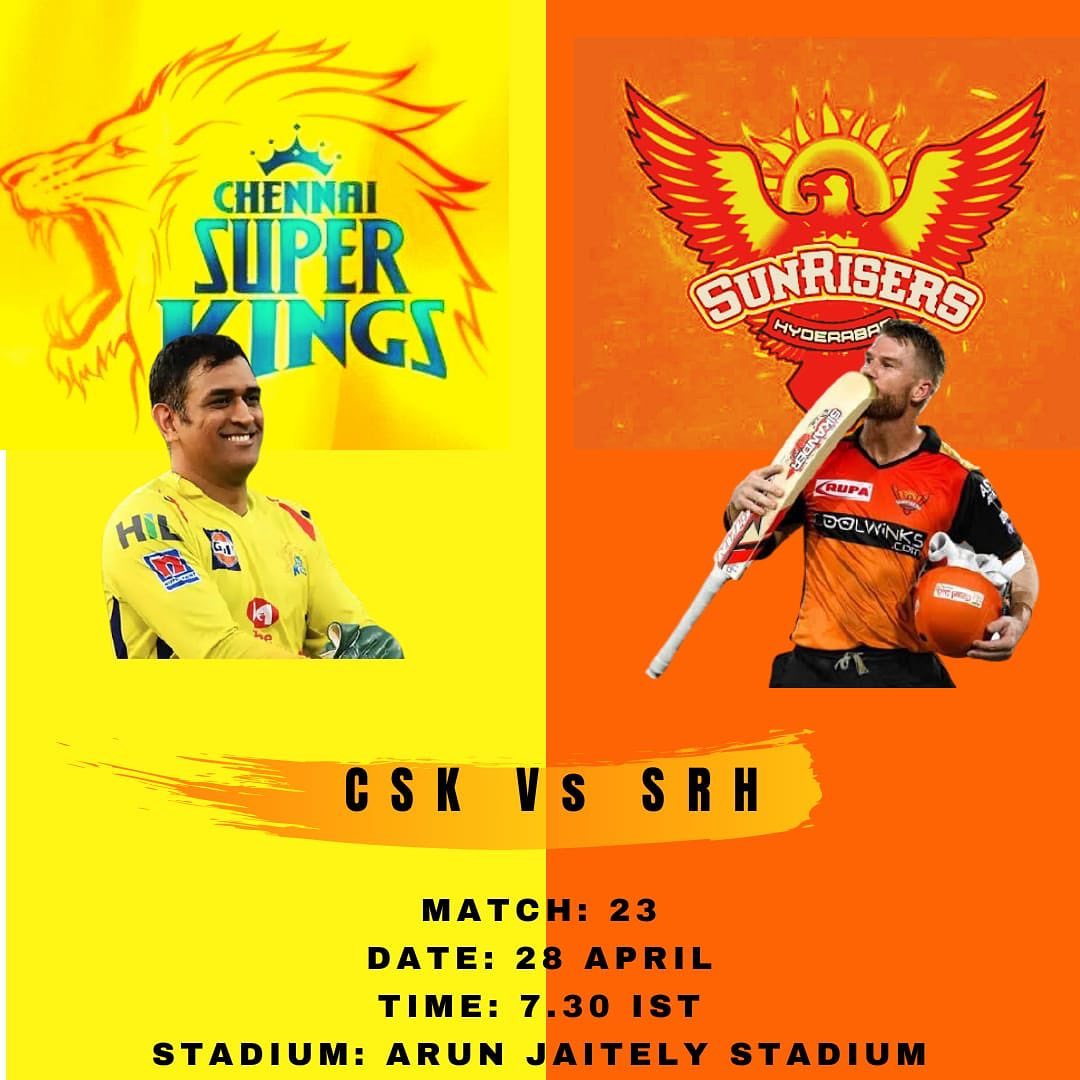 23rd Match of this season IPL 2021 is the match between two teams running on different horses.

With four wins from five matches CSK is fully charged up for this match, While SRH on the other hand is still struggling with four defeats from the five matches.

Dhoni Vs Warner is surely gonna be one of the interesting matches.

Team Dhoni being the fans Favourite along with the openers Faf du Plessis and Ruturaj Gaikwad and bowler like left hander Jadeja and attack opener like Chahar seems little dangerous for the other team.

But in the end cricket is always full of twists and turns so you never know till the end.

Let us take a look at yesterday’s match:

Toss: Sunrisers chose to bat first on winning the toss.

Time for the first innings and the game starts with Chennai Super Kings on the field to ball against Sunrisers.

Sunrisers Inning- Beginning of the Battle

Match started with power duo Warner and Bairstow from SRH’s team and CSK sent his usual opener Chahar for the attack.

It’s 25/1 after four overs for SRH. Bairstow’s wicket was gone in this over.

Manish Pandey on the crease now along with captain Warner.

Pandey’s start in this tournament was very remarkable and brightening with 61 runs against KKR but unfortunately, it didn’t continue in other matches.

And it’s the end of powerplay overs, leaving SRH at a score of 39 runs with the loss of 1 wicket after 6 overs.

It’s 100 plus for SRH, Pandey gets his FIFTY for tonight. This duo is playing safe today.

Warner reaches his milestone in style. with a 77 metre six, it’s 50th IPL Fifty for him.

The partnership continues with 100-run together.

The eighteen over was a disaster for SRH Team as it took not only one but two wickets together.

First Warner was sent back, to which Williamson came in to join Pandey.

But it’s again a wicket loss of Pandey in the same over.

William ended this over with a nice FOUR.

20 more runs in the nineteenth over by this New Zealand batsman.

Ruturaj along with Du Plessis to open the match from the CSK Team and Abhishek Sharma will start the attack.

Score Update after this over – 31 runs and no loss of wickets.

The Power Play ends with Perfection and CSK are at 50 runs after 6 overs.

CSK making it look very easy with boundaries by du Plessis and Gaikwad adding good runs in the team’s pocket.

And it’s 100 runs for CSK with Plessis completing his Fifty for tonight.

WoW, Gaikwaad too gets his fifty in the 12th and that in style.

CSK loses its first Wicket. Rashid got his man, Gaikwad was sent back to the pavilion.

Two more wickets, one of Moen and other Du Plessis were gone in the fifteen overs.

Raina with his first boundary of the night completes his 500th FOUR in the IPL.

Raina finishes the match in just 18.3 overs with a full toss shot and boundary.