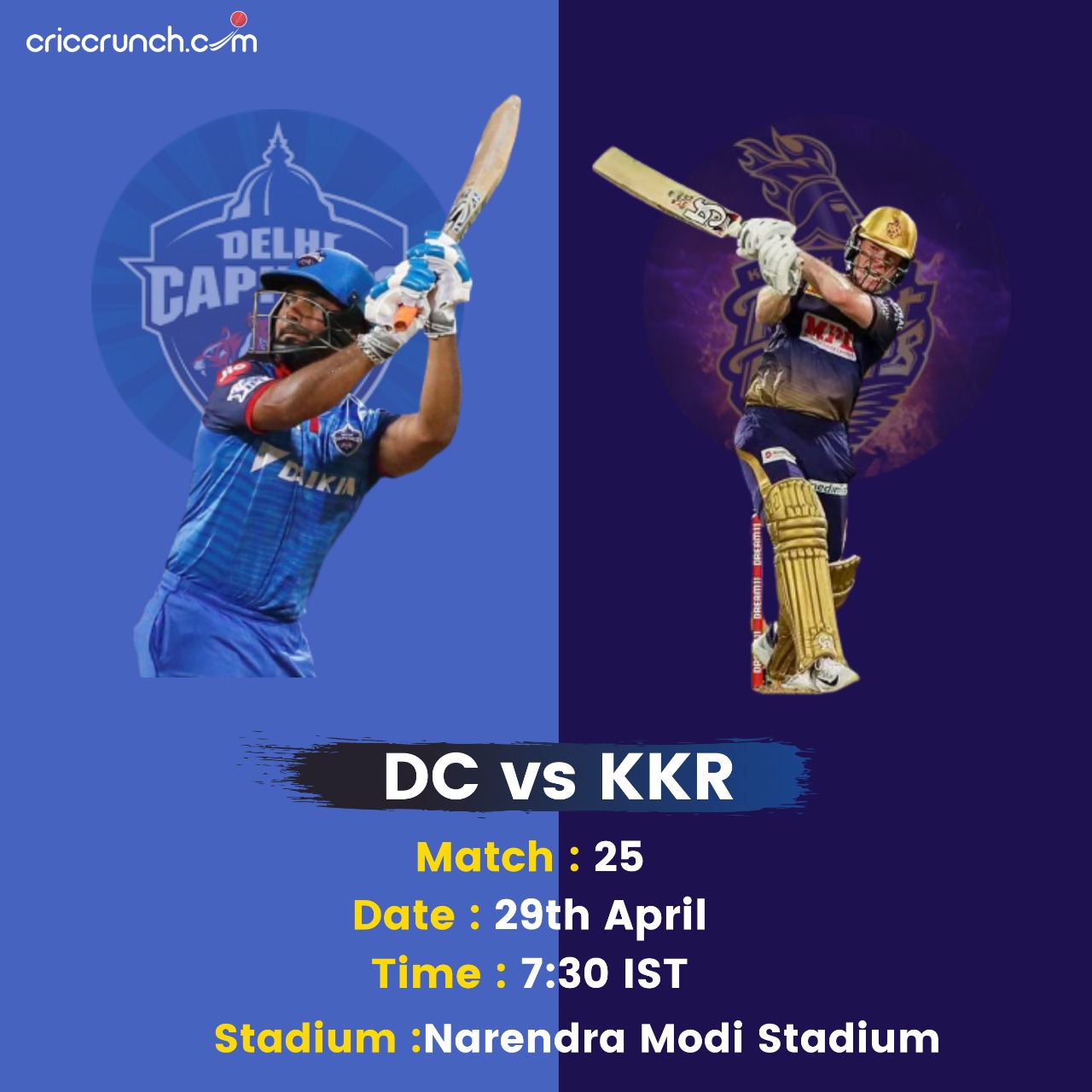 KKR is hoping for a comeback after losing four of five matches with DC.

Let’s get started with a full review of yesterday’s match between the teams Delhi Capitals and Kolkata Knight Riders.

To begin with, DC VS KKR Match Highlights:

Ishant Sharma starts with the first over and KKR openers Nitish Rana and Shubham Gill with bats on the crease.

Steady start by the openers and a good over by Sharma.

KKR is relying on singles and doubles.

And after a brilliant SIX on the third ball of the fourth over Rana got stumped out by Pant on the very next ball of this over.

KKR while maintaining a slower run rate is at a score of 32 runs with a loss of one wicket after 5 overs.

Gill and Tripathi played a steady game with few boundaries and singles.

It’s again a wicket loss for KKR. Tripathi was caught out after scoring 19 runs off 17 balls.

A good strike by Lalit Yadav made KKR lose its skipper Eoin Morgan.

Wow-what a brilliant over by Yadav as another massive wicket of Naraine in his feather within the first three balls.

Smith got his 50th Catch of IPL in the thirteenth over by Avesh Khan.

It is Gill, who was sent back to Pavilion with 43 runs in his pocket.

Karthik and Russell went into the act trying to get a few more runs for the team until the sixth wicket of Karthik was gone in the 17th over.

With few boundaries including his Twin Sixes! in the 19th over. He managed to take the team at a score of 141 runs with a 6 wicket loss.

It’s the fantastic end of the innings with Cummins hitting two FOUR and a huge six in the end by Russell.

Team Delhi is ready for the chase with its openers Shikhar Dhawan and Prithvi Shaw.

Shivam Mavi is up with the new ball.

FIRE starts by DC. Shaw has done a dream start

Four boundaries in the first four balls by this youngster.

With few more boundaries in the second and third overs. This partnership reached its fifty in just 3.4 overs.

KKR is worried about this Batsman now.iIt’s48 runs from 15 balls for this hitter.

With 67 runs without any wickets in the powerplay, it seems they are in a mood to finish this game early.

With both scoring a boundary against Cummins in the 9th over.DC is at a score of 81/0.

Chase is getting easy with each passing over.

The game was going too smooth but Dhawan was made lbw out by Cummins in 14 overs.

And the beautiful inning of Shaw came to an end again by Cummins along with Pant’s wicket in the 16 over.

If you like the coverage of DC vs KKR Match Highlights by our team then do comment below so that we can bring you such content on daily basis.