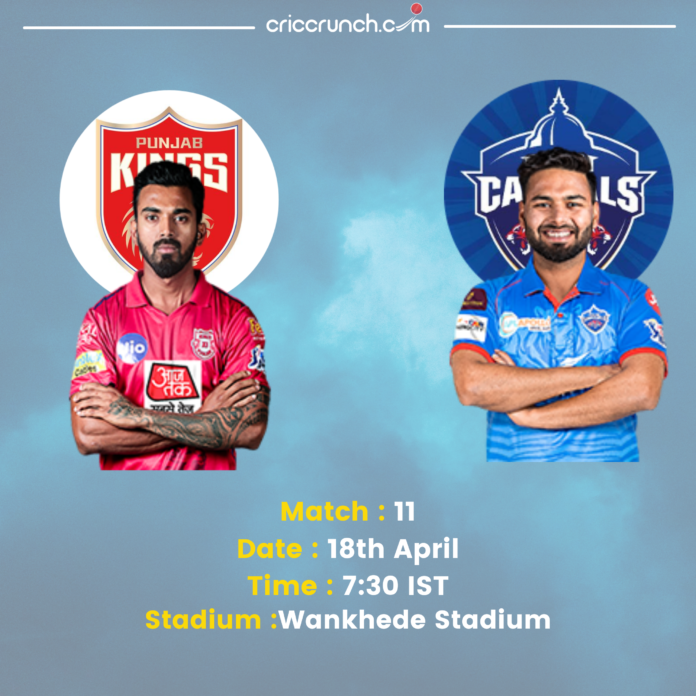 First over started KL Rahul and Mayank Aggarwal on the bat to open the innings with Chris Woaks from Delhi Capitals-in power.

AND it’s a FOUR on the 4th. Birthday Boy KL Rahul got his first boundary of the game.

With End of over and Lukman Meriwala on the ball, Another Four on the very first ball of this over by none other than the Birthday Boy and Mayank hits a boundary by the end of this over.

Brilliant Start of the Match by Punjab Kings.!!!

With almost a boundary in each over Punjab Kings is at a score of 54/0 by the end of 5 overs.

Brilliant over by Ashwin forces KL Rahul and Mayank Aggarwal to stick with singles.Punjab Kings at 63/0 after 7 overs.

Mayank’s Crazy three boundaries in the 11th over by Rabada made him go out of breath.

After brilliant innings, Mayank got caught out by Shikhar on a ball by Meriwala.

Chris Gayle joins Kl Rahul and the birthday boy with only one short of completing his 5000 IPL runs got catch out by Marcus Stoinis on the ball by Rabada.

Punjab is now at 150 runs with four overs remaining.

Rahul’s awesome Innings of 61 Runs on 51 Balls has given good hope for this evening to Punjab Fans.

Gayle is also caught out in the 17th over.

Punjab gave the chase of 195 runs with the end of the 20th over.

A good target of 196 runs by Punjab Capitals. Let’s wait for what magic Delhi Capitals do to win today’s match.

Arshdeep starts the over from Punjab Capitals with Dhawan and Shaw on the bat to start their innings for the chase.

Good start by Dhawan with one boundary in his pocket makes the score of 10 runs for Delhi Capitals by the end of 1st over.

Delhi playing super exquisite today. With an average of 10 runs in each over, DC is at a score of 58/0 after 5 overs.

Arshdeep managed to remove the” Dangerman” in the sixth over as Shaw got caught out by Gayle in his over.

And Dhawan gets himself another Fifty and Score by the end of the 10th over is 99/0.

AND it’s OUT! Just eight short of his 100 runs, Shikar caught out after playing fantastic innings of 92 runs.

Pant, Marcus, and Lalit helped the team to reach the target in 18.2 overs only.

With a loss of only 4 Wickets and a score of 198 runs, Delhi done and dusted the match in 18.2 overs which makes them a Winner!!

Check out Match #1 on sunday review , RCB vs KKR