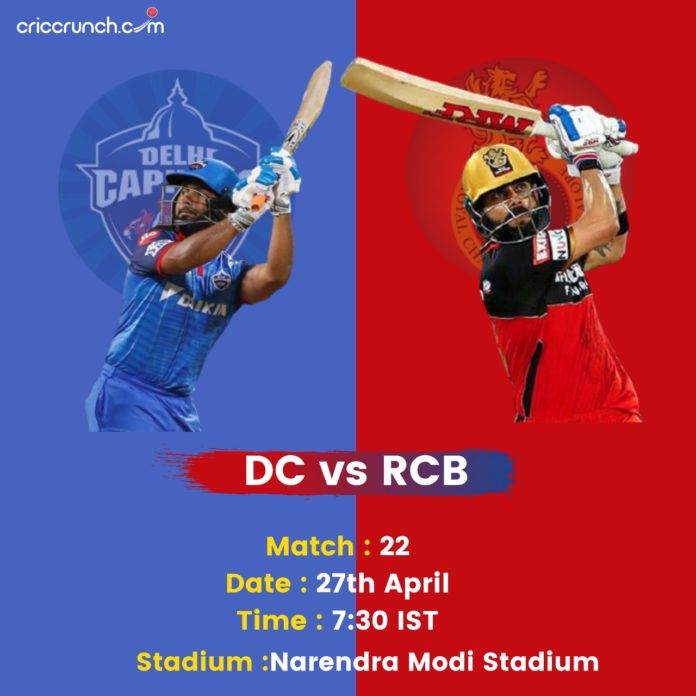 After winning that crunching super-over DC will be looking to get another win. RCB, on the other hand, will be coming off their first loss of the tournament. Check out what you might have missed in the previous DC VS RCB Match Highlights below.

Let us take a look at yesterday’s match:

Toss: Delhi Capitals won the toss and opted to bowl.

Avesh Khan got the big fish by getting Kohli out in the 4th over. In the very next over, Padikkal also lost his wicket.

DC had done a fantastic job in restricting RCB to dominate in the powerplay.

Delhi got the big breakthrough when they got the wicket of Glenn Maxwell. All eyes were on AB de Villiers.

Rajat Patidar played a sensible inning with AB de Villiers and made 50 runs partnership, which was needed for RCB.

DC took a wrong decision by giving last over to Marcus Stoinis, and ABD took advantage of it by hitting 23 runs.

The chase was led by Prithvi Shaw and Dhawan. Daniel Sams opened the attack for RCB.

Dhawan got out early in the 3rd over. RCB celebrated by getting the orange cap holder for just 6 runs.

Soon Smith also got out in the 4th over. DC was in big trouble at that moment.

A huge blow for DC happened when Shaw also got out. It all depended on Rishabh Pant how he will perform.

Hetmyer got his 2nd IPL fifty. He played a fiery inning to help Delhi Capitals to reach the target.

14 runs were needed in the last over.

But DC only managed to make 12 runs. RCB survived this match marginally.

RCB won the match by one run.

Do Let us know in the comment section if you like our DC Vs RCB Match Highlights for IPL 2021 season. 🙂