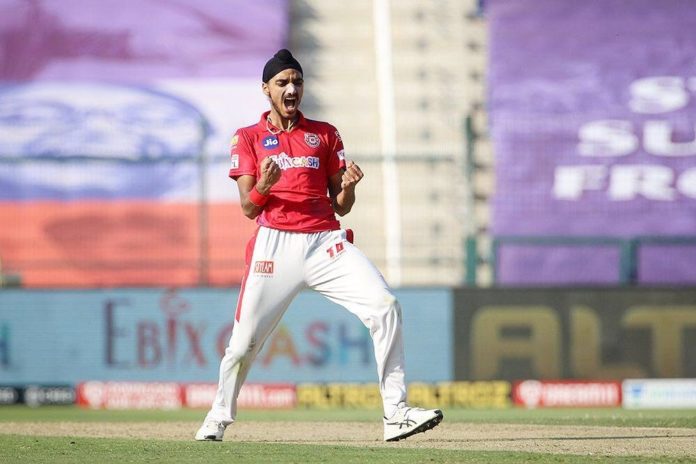 Life Of Cricketer Arshdeep Singh, The IPL match which was previously scheduled to begin on 29 March 2020, got postponed a couple of times, making the board wonder if they should maybe cancel it. After some of the travel restrictions were eased, the Indian Premier League finally commenced on 19th September and ended on 10th November 2020 at the United Arab Emirates. The matches were allowed to happen in Dubai, Abu Dhabi, and Sharjah.

This season was heartwarming not only to people who had been locked in their house for months but also to some of the young players who finally had the chance to show their talent and not warm the side benches. One such notable young star player of the match was Arshdeep Singh of Kings XI Punjab.

A True Punjabi at Heart:

Arshdeep Singh, the left-handed bowler, was born in the small town of Guna in Madhya Pradesh in 1999. His family was from Punjab previously, and he makes it his mission to always stay true as a Punjabi at heart. Ardeep Singh did not start playing cricket until he was 13 years old. His first cricket match was for his school game.

His father Darshan Singh has always played an active role in getting him engaged and involved in games. He wasn’t much of a cricket game watcher and remembers only ever watching one cricket match before. It was a Champions League game and the match was between Auckland Aces and Kings XI Punjab.

Arshdeep Singh prefers to play cricket outside rather than be an outsider watching it. As a child, Arshdeep Singh watched a lot of hockey games. These hockey games were an important part of some of the games played in Punjab. His father took it as his duty to take the whole family to watch these hockey matches together.

He even remembers how his father used to take him, his mother and his sister together in a scooty to watch these games. His father wished for him to become big in life so that they could get a car to travel together in leisure and watch these matches. Arshdeep Singh did fulfil this dream of his father but not in the way that he had expected.

The Hard Decision that Changed His Life and Fate Forever:

If you believe in fate and get what you are meant to be, Arshdeep Singh’s rise to success would not be different for you. Like any other true story to success, Arshdeep Singh’s success consists of a lot of ups and downs together with hard work, determination and perseverance.

Ever since his childhood, Arshdeep Singh began playing cricket matches seriously. His father was very much supportive of all his games. Arshdeep Singh used to cycle 13 km from his house in Kharar to Guru Nanak’s Public School in Chandigarh every day just so he could practice playing cricket.

His father was disheartened and afraid that he wouldn’t make out big in life if he continued to pursue cricket further. He wanted him to have a change of career path and get settled to become well off in life.

So he wanted to send him to Canada.

In Punjab, it was the norm for everybody to go to Canada and get settled there with a good earning job if things didn’t work out in India. Arshdeep Singh’s family was not any different from the ideology that other Punjabis had.

Ardeep Singh’s older sibling had previously gone to Canada to study at first and got settled there with a job and a family. Darshan Singh, Ardeep Singh’s father also wanted him to follow the same path and get settled in Canada.

All plans were made to send Ardeep Singh to go to Brampton in Canada and start a new life with good education and a stable job, but Ardeep Singh did not have the heart to leave his motherland or the sport that has become a part of his life.

Hence Ardeep Singh took one of the decisions of his life and had a much needed hard conversation with his father regarding his career. He had asked him a year’s worth of time to work on his career. His father agreed and this served as the turning point for his life, for all good things began to manifest in his life soon.

The Dream Life Of Cricketer Arshdeep Singh The Beginning of All Good Things:

Soon after in 2017, Arshdeep Singh had the opportunity of representing Chandigarh and Punjab cricket teams in several state-level cricket matches and tournaments. He had taken 13 wickets for Punjab in the Vinoo Mankad Trophy. He ended this tournament by being the second-highest wicket-taker.

In 2017, he played in the Punjab Inter-District One Day International Championship for the DP Azad Trophy. He represented Chandigarh during the championship and managed to claim 19 wickets in 5 matches.

He also debuted in international youth cricket in 2017. He played his first international match against Malaysia Under 19 on 10th November 2017 in Kuala Lumpur at Asian Cricket Council Under 19 Asia Cup 2017.

2017 seems to be the golden year in both Arshdeep Singh’s career and life as he began getting opportunities to play cricket in a variety of matches. Arshdeep Singh played in the Under 19 Challenger Trophy in the same year for the India Red Team.

This tournament helped him to be discovered for his incredible bowling skill. He had the capacity to claim 7 seven wickets which also included a 5 – wicket haul. This was the astonishing match that helped turn the spotlight on him.

In 2018 he got the amazing opportunity of participating in the International Cricket Council Under 19 Cricket World Cup. India won the tournament that was held in New Zealand. Arshdeep had his best play when India played against Zimbabwe. He bowled with an economy rate of 1.43 in about 7 overs. He conceded about 10 runs to the opponent team but also took 2 wickets.

The selection team for Vijay Hazare 2018-19 was impressed by his performance and selected him to represent the state team. His debut in this tournament was not too bad as he claimed 2 wickets in the match against Himachal Pradesh.

In his game in the CK Nayudu Trophy, he had finished up with 10 wickets. His team also scored 208 runs and won by an inning. His stunning performance had caught the eyes of Mumbai Indians and Kings XI Punjab and they had called him for a trial.

He had only hoped to get into the Punjab Ranji Trophy that season but won the golden trophy when he got selected by Kings XI Punjab to play in the Indian Premier League. This became a true life changer and Arshdeep Singh continues to do his wonder.

We would have to wait and watch what his games and bowling power would be like in the future and hope that his plays would be just as impressive as his beginning.