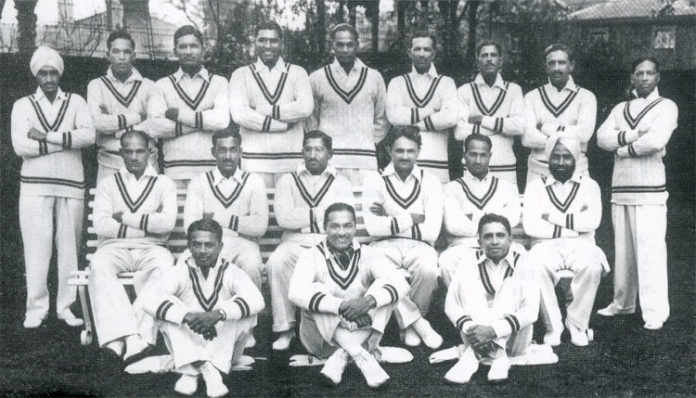 India and cricket share a pure relationship which can never be explained in words. Cricket in India is the biggest and most beloved sport. The history of cricket in India shows how far the game has come from the day it was started.

The Start of cricket in india

Cricket in India was introduced by Britishers in 1700 and the first match was played in 1721. In 1848 the Parsi community in Bombay formed the Oriental Cricket Club-the first cricket club established by Indians.

In the early 1900s some Indian went on to play for the England cricket team, namely Ranjitsinhji and Duleepsinhji, later their name was used for Ranji Trophy and Duleep Trophy and this started the history of Cricket in India.

In 1911 India team went on the first official tour of the British Isles but only played with English country teams and not with the England cricket team.

India was invited to the imperial cricket Council in 1926 and Indian team made their debut as a test playing nation in England in 1932, led by CK Naidu.

The one-off test match between England and India was played at Lord’s ground in London. India lost the match by 158 runs.

In 1933 India hosted its first test series. The team’s first series as an Independent country was in late 1947, which was against Australia.

During the 1970s India saw the emergence of two of the best ever batsmen Sunil Gavaskar and Gundappa Viswanath. These players were responsible for back-to-back series wins in 1971 in West Indies and England, under the captaincy of Ajit Wadekar.

The first one-day international(ODI) was played by India in 1974 against England. Indian began as a weak team in ODI and did not qualify for the second round in the first two editions of the World Cup.

In 1983 India won its first World Cup defeating West Indies in the final at Lord’s and this win changed the History of cricket in india.

In 1984 India won the Asia Cup and in 1985 won the World Championship of Cricket in Australia.

1980s saw Gavaskar and Kapil Dev at the pinnacle of their career. Gavaskar made a test record 34 centuries, he became the first man to reach the 10,000 run mark. Kapil Dev became the highest wicket taker in test cricket with 434 wickets.

In 1989 and 1990 the addition of Sachin Tendulkar and Anil Kumble to the Indian team further improved the team.

Despite the greatest player on their side during the 90s India did not win any of its 33 tests outside the sub continent while they won 17 out of 30 tests at home.

After being eliminated by Sri Lanka in the World Cup semi-final in 1996, the team underwent a lot of changes as Sourav Ganguly and Rahul Dravid became the team captain.

By the beginning of 1998 Tendulkar was the world leading run scorer in both Test and ODI and India enjoyed a home test series win over Australia.

After failing to reach the semifinals in the 1999 World Cup, India suffered a poor loss of 3–0 on a tour of Australia and then 2–0 at home to South Africa.

In 2000 Ganguly was appointed as the new captain and a lot of controversies took place. Azharuddin and Ajay Jadeja were implicated in a match fixing scandal and given a ban. This period was described as the Indian Cricket Worst Hour.

However the new core – Sachin Tendulkar, Rahul Dravid, Anil Kumble and Sourav Ganguly swore not to let this happen to them again and led Indian cricket out of dark times.

21st Century in History of Cricket In india

The Indian team went from major improvements under the captaincy of Sourav Ganguly and the guidance of John Wright. India maintained their unbeaten home record against Australia in the test series after victory in 2001.

In 2001 India was the joint winner of ICC champions trophy with Sri Lanka and they went to the 2003 cricket World Cup where they reached the final but were beaten by Australia.

2003 to 2004 India was sent to play out a test series in Australia, where they drew 1–1 with the world champions and then won a test and ODI series in Pakistan.

In 2004, India suffered from a lack of form and fitness from their old players. A defeat in a home test series against Australia was followed by an ODI home series defeat against Pakistan.

2005 was the year When the Indian Team saw emergence of players like MS Dhoni, Suresh Raina, Irfan Pathan and Yuvraj Singh. In 2005 India won a home series victory over Sri Lanka and drew a series with South Africa which put India to the second place in ICC ODI rankings.

The beginning of 2007 was a revival of the Indian team under the captaincy of Mahindra Singh Dhoni.

After winning the test series against England in August 2007 Dhoni was made the captain of the Twenty20 and ODI team.

In September 2007 India won their first ever Twenty20 World Cup by Beating Pakistan.

In 2007-08 India toured Australia where India lost the highly controversial home test series 2–1 but managed to win the CV series.

In 2009 India secured the first test series win in New Zealand in 41 years. After beating Sri Lanka 2–0 in December 2009 India became the number one test team in the world.

They retained this ranking by drawing series against South Africa and Sri Lanka. In October 2010 India whitewashed Australia 2–0 in home test series.

During 2011 England replaced India as the number-one ranked test team. This year saw Retirement of players whose names created history of Cricket in India – Rahul Dravid and VVS Laxman. Sachin Tendulkar retired in November 2013 and Sourav Ganguly retired in 2008.

2011 was a transition period for the Indian cricket team. India was knocked out of the second round of 2012 ICC World Twenty20 and also failed to qualify for the 2012 Asian cup final.

When the Indian team was touring Australia by the end of 2014 they saw the sudden retirement of MS Dhoni.

India begins to dominate at home in test series under new captain Virat Kohli. They beat South Africa in 2015 and the series was the beginning of an unbeaten streak of 19 test matches. The series also saw the emergence of Ravichandra Ashwin and Ravindra Jadeja.

By 2016 MS Dhoni resigned from captain in limited over and thus handed the captainship to Virat Kohli across all formats.

India beat England across all the three formats with 4–0 win in the test series, followed by a test series win against Bangladesh and Australia. India became the third team to have won their test series against all other test playing nations. India holds an unbeaten record of 8 consecutive test series wins in 2017.

The Indian team played the 2019 World Cup, the team finished first in the group stage with 7 wins and only 1 loss which came against host nation England. They made it to the semifinals but lost to England. Rohit Sharma was the highest run scorer for the team with 648 runs. The T20 series was drawn and meanwhile the test series was won by India.

This was a brief history of cricket in India. Starting from 1700 to 2021 the Indian cricket team has achieved many records and recognition since their debut as a team.Today Indian cricket team is referred as the one of the best teams in the world with the world’s best players.