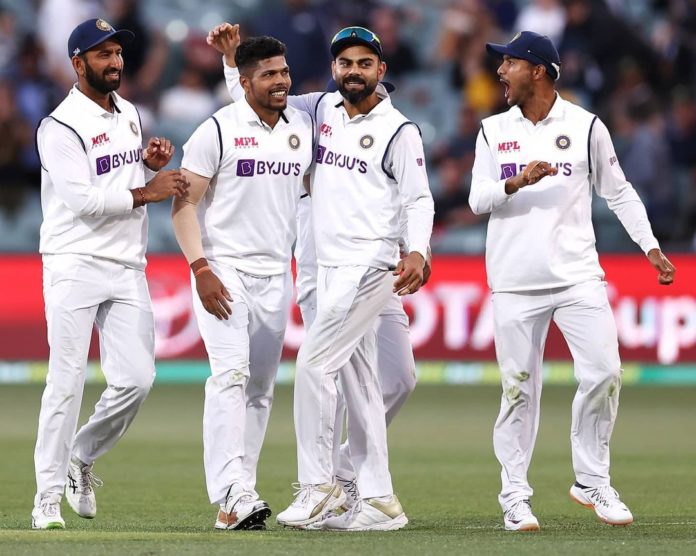 Well, there is no doubt in the fact that we all have been so anxious and so excited for the first Test (Night Test Match) between Australia and India for the Border-Gavaskar Trophy.

The four-match series (Night Test Match) between India and Australia, commonly known as the Border-Gavaskar Trophy, is currently held by India.

This India vs. The Australia Test series is a part of the ICC World Test Championship. The final will be played in June 2021 at the Lord cricket ground in London. The top two teams on the ICC WC points table will be able to qualify for the finals.

India NEEDS to win this series to keep our hopes alive for the BIGG final at the Lord cricket ground.

Just like most of the sports events happening this year. It has taken a huge amount to get the match on the road. Sure, the ODI and T20I matches were the nice starters, but this is the whole meal!

Four Test matches in a month!!

On the first day of the match, India won the toss and decided to bat first.

The first hour of the series was intense. India was able to weather it for just the early loss of Prithvi Shaw.

We got to see some impressive bowling from Australia. But unfortunately, India could not leave at all, and the wickets of both openers got grabbed. The Indian team’s big two- Pujara and Kohli, managed to take the team through to lunch. And they have a lot of work to do before the final session under lights.

The contest between Cummins and Kohli was absorbing.

It was an interesting yet intense match. Another tough session was when Australia extracted the vital wicket of Pujara, who got an inside edge into his pad, caught at leg slip. Sadly, Kohli reached a half-century – the second-slowest of his Test Career.

Just three overs before the new ball was due, Rahane drove the ball towards mid-off and then set off for a run. But, he changed his mind while leaving Kohli stranded mid-pitch with no chance of getting back.

Thanks to a bad call by Rahane, India lost seven wickets for 56 runs starting with skipper Virat Kohli’s run-out.

It was one of the defining moments of the match.

If one goes by how the pink ball matches at Adelaide have panned out. India has scored at least 75 runs less than what should have been a fighting first innings total.

In the end, Kohli’s dismissal cost us dearly.

Jasprit Bumrah bowled an AMAZING opening shot to show the Australian team openers where they belong. He left the Australian team, leaving tottering at 35 for 2 balls after their players dismissed the Indian team for 244 during the first session of the Opening Day/Night Test Match second day.

Joe Burns and Mathew Wade were all set and prepared to play the tough waiting game till our very own Bumrah bowled fast and full. Bumrah trapped both of them leg-before while India ended on the right side of the Umpire Call on both the occasions.

Mohammed Shami and Umesh Yadav also kept things tight. Even though they were a tad more on the shorter side in the session as compared to Bumrah. Bumrah, on the other hand, really reaped dividends for bowling fuller deliveries.

Marnus Labuschagne was living his charmed life just before Wriddhiman Saha. Proclaimed to be THE best wicket-keeper in the world, missed a tough but gettable catch behind Bumrah.

Labuschagne had insanely good luck when Bumrah dropped a dolly at the fine leg after Labuschagne mistimed a pull shot off of Mohammad Shami.

Labuschagne then went into the break with Steve Smith for the company.

The Australian openers were ready to stay put and wait but Bumrah decided to angle a fuller one into Wade. Which caused him to trip on the pads while he was trying to whip it to mid-wicket.

Burns, the bad patch man, also did all the hard work before Bumrah fired one fast and full into the block-hole and got the decision in his favor.

At the start of the 2nd day, India’s tail-enders contributed precious little since the first innings folded in only 93.1 overs.

I cannot stop laughing but, Mitchell Starc and Pat Cummins dismissed their last four batsmen for an additional 11 runs to be added to the overnight score.

In the first session of the second day, India’s first innings ended at 244. Ravichandran Ashwin and Umesh Yadav were the top wicket-takers for India

India was nine for one in the second innings at stumps on the second day in the Test of four-match series against Australia at Adelaide Oval.

Starting its second innings 53 runs ahead after bowling out Australia for 191. The visitors extended their lead to 62 by the end of the day’s play. At stumps, Mayank Agarwal and night-watchman Jasprit Bumrah were at the crease.

To sum it up (Night Test Match)

As day-night Tests can do, the action in Adelaide went by fast. It was because 15 wickets fell on the second day.

Australia tried to end close to India’s 244. Captain Tim Paine, was left unbeaten on 73 while Marnus Labuschagne, with a skittish 47, was the only other player to pass 15. And the rest of the top six made 35 between them.

India could not get through six overs unhinged as Pat Cummins breached Prithvi Shaw’s defences. Australia exploited a technical failing that might end Shaw’s series after one match. But the loss of one wicket was still acceptable damage.

Anyway, all the India bowlers played their part. Mohammed Shami was the first of the team to find a fuller length – with Jasprit Bumrah, who made the initial incisions and, Ashwin produced a delightful piece of bowling to snare Steven Smith that left Australia from where they did not recover.

Thanks to our bowlers, India mostly got away with three dropped chances. The first part of the day could not have gone any better for the home side as they ran through India’s lower order, for the addition of just 11 runs. From the moment of Virat Kohli’s run out on Thursday, India lost its last seven wickets for 56.

Initially, with the ball, Bumrah and Umesh Yadav offered a little too much that Australia could leave. But, the new-look opening pair of Joe Burns and Matthew Wade did not make any impression on the scoreboard. The first runs came in the fifth over. Then, Wade was LBW from round the wicket, and it was 16 for 1 in the 15th over.

Labuschagne started his innings by yelling ‘no-run’ as he left the ball alone, almost fell to an early edge that just evaded Saha but, there was a more clear-cut chance when he had 12 and, top-edged a pull towards long leg where Bumrah made a real mess of it.

After lunch, he was given a second chance when Shaw dropped a simpler chance at square leg, but India mixed the poor with the very good to stay in charge.

Smith had scored one run in 28 balls when Ashwin sent down a delivery that went straight on – whether by design or not – that got edged to slip to send Ashwin off in almost a lap of celebration. At 45 for 3 in the 27th, India had a grip on both the wickets and the run rate.

Ashwin then worked over Travis Head, who chipped a soft return catch, and that brought Cameron Green in for his first Test innings with Australia tottering. There were early signs of crisp footwork but, he became Ashwin’s third wicket when a pull went no further than Kohli at midwicket.

Labuschagne and Paine started to recover, only to make 32 when Umesh Yadav skidded one into Labuschagne pads to leave the bowlers exposed. Cummins could not see-out the over as he fended a short delivery into the gully and, at 111 for 7 a deficit in three figures was on the cards.

Paine had shown urgency at the crease from the start. Mitchell Starc was run-out coming back for a second but, Nathan Lyon and Josh Hazlewood hung around.

Paine went to his 50 with a strong square-cut and followed it with a slash over the slips as Kohli’s face grew a little more impatient to wrap things up, but perhaps also partly aware of the tricky period his top-order would face under lights.

Ashwin removed his opposite number, Lyon, for his fourth wicket but was thumped for two boundaries by Hazlewood to further chip away at India lead, meaning a return to Yadav, who claimed the No. 11 with his first ball back.