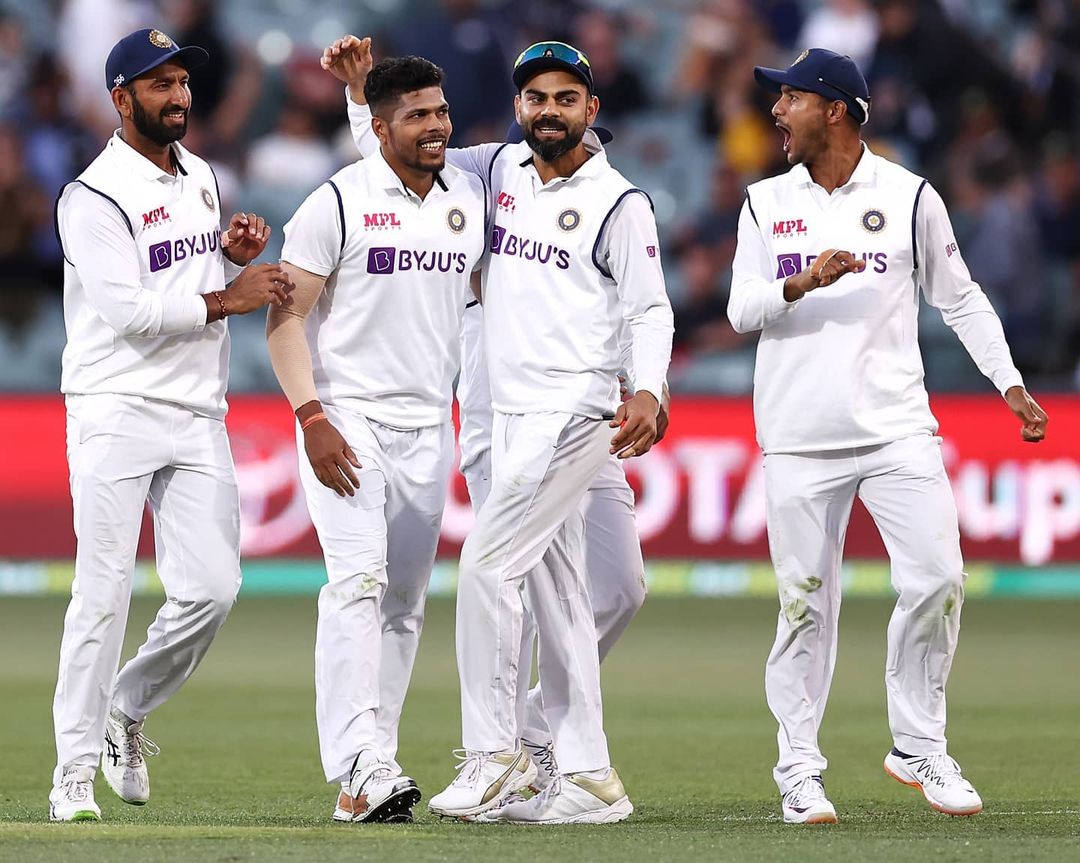 People all over the world have displayed excitement for the India vs Aus 1st Test Match for the Border-Gavaskar Trophy.

The four-match series between India and Australia, also known as the Border-Gavaskar Trophy, is currently held at Adelaide.

This India vs. The Australia Test series is a part of the ICC World Test Championship. The final will be in June 2021 at the Lord Cricket ground in London. The top 2 teams on the ICC WC points table would qualify for the finals.

Just like most of the sports events happening this year, it has taken amounts to get the match on the road. Sure, the ODI and T20I matches were the starters, but this is the whole meal!

Four Test matches in a month!!

On the first day of the match, India won the toss and decided to bat first.

The first hour of the series was intense. India was able to weather it for just the early loss of Prithvi Shaw.

We saw some impressive bowling from Australia. But unfortunately, India could not leave at all, and the wickets of both openers got grabbed.

It was an interesting yet intense match.

One of the defining moments of the match was when Rahane stopped mid-run. India lost seven wickets for 56 runs starting with Virat Kohli’s run-out.

India scored at least 75 runs less than what should have been a fighting first innings total.

Jasprit Bumrah bowled an AMAZING opening shot to put the Australian team openers back where they belong. He left the Australian team, leaving tottering at 35 for 2balls after their players dismissed the Indian team for 244 during the first session of the Opening Day/Night Test second day.

Labuschagne had insanely good luck when Bumrah dropped a dolly at the fine leg after Labuschagne mistimed a pull shot off of Mohammad Shami.

Labuschagne then went into the break with Steve Smith for the company.

The Australian openers were ready to stay put and wait but, Bumrah decided to angle a fuller one into Wade, which caused him to trip on the pads while he was trying to whip it to mid-wicket.

In the first session of the second day, India’s first innings ended at 244. Ravichandran Ashwin and Umesh Yadav were the top wicket-takers for India

The action in Adelaide went by fast. It was because 15 wickets fell on the second day.

India could not get through six overs unhinged as Pat Cummins breached Prithvi Shaw’s defences – Australia exploited a technical failing that might end Shaw’s series after one match – but the loss of one wicket was still acceptable damage.

Anyway, all the India bowlers played their part. Mohammed Shami was the first of the team to find a fuller length – with Jasprit Bumrah, who made the initial incisions and, Ashwin produced great bowling to snare Steven Smith that left Australia from where they did not recover.

Initially, with the ball, Bumrah and Umesh Yadav offered a little too much that Australia could leave but the new-look opening pair of Joe Burns and Matthew Wade did not make any impression on the scoreboard. The first runs came in the fifth over. Then, Wade was LBW from round the wicket, and it was 16 for 1 in the 15th over

Smith had scored one run in 28 balls when Ashwin sent down a delivery that went straight on – whether by design or not – that got edged to slip to send Ashwin off in almost a lap of celebration. At 45 for 3 in the 27th, India had a grip on both the wickets and the run rate.

Labuschagne and Paine started to recover, only to make 32 when Umesh Yadav skidded one into Labuschagne pads to leave the bowlers exposed. Cummins could not see-out the over as he fended a short delivery into the gully and, at 111 for 7a deficit in three figures were on the cards.

Paine went to his 50 with a strong square-cut and followed it with a slash over the slips as Kohli’s face grew a little more impatient to wrap things up, but perhaps also partly aware of the tricky period his top-order would face under lights.

The third day promised so much. But, Josh Hazlewood reached 200 Test wickets and Pat Cummins dismantled India for their lowest ever Test. Australia secured victory before the floodlights.

India resumed at 9 for 1and lost Prithvi Shaw in the second match. It had a lead of 62 under their belts. They expected that anything over 200 would make them repeat their 2018-19 victory on the ground.

In 16 overs, they were all out. Not a single batsman reached double figures –for the first time in Test history. The last-man, Mohammed Shami forced to stop because of a fierce blow on the arm from Cummins.

Australian bowlers were on the mark from the first ball. When Cummins collected a low return catch off Jasprit Bumrah, they became unstoppable. The nine wickets on the third day fell for 21. From Kohli’s run out on the first day, when India well placed on 188 for 3, they had lost 17 for 92.

It was a perfect day for Australia and the new openers Matthew Wade and Joe Burns. The pair put on 70 for the first wicket. Wade played confidently and compactly. He made his highest score of the season, which included some increasingly neat strokeplay, brought up a half-century with a top-edged hook for six that brought victory.

Post Four overs after the first wicket of the afternoon, Cummins made the breakthrough. It began the Australian surge.

A perfect delivery took Cheteshwar Pujara outside edge and low to Tim Paine – the first of FIVE catches for Australian captain, whose unbeaten score on the second day became matchwinning.

One shot of Joe Burns made a world of difference. When he latched onto a short ball from Umesh Yadav in the 7th over Australia chased in, it rocketed to the square-leg fence like few shots he has struck this season. An hour later, he top-edged for 6. It brought a 50, a victory, and a sense of accomplishment.

Burns entered the series on the back of 62 runs in nine innings this season. His position was the topic of debate in the days leading into the first Test;

The injuries to David Warner and Will Pucovski helped in that options had diminished, but it was still a show of faith.

In the first innings, he battled for more than an hour before an lbw decision against Jasprit Bumrah. The next day, he has hammered a painful blow on the elbow from Bumrah.

Burns said that he was batting one-handed before he was dosed up with painkillers and strapped up. He was far from pain-free – subsequent scans have cleared him of any damage – but a few overs into the resumption, he was playing with as much freedom as he has managed all season.

It is funny how mostly one-shot can give you everything that you have been searching for in this game.

Burns also revealed in the high intensity of the Test arena. Even when the runs completely dried up in the two warm-up matches against India- with scores of 4, 0, 0, and 1 – he felt he could draw on his past achievements.