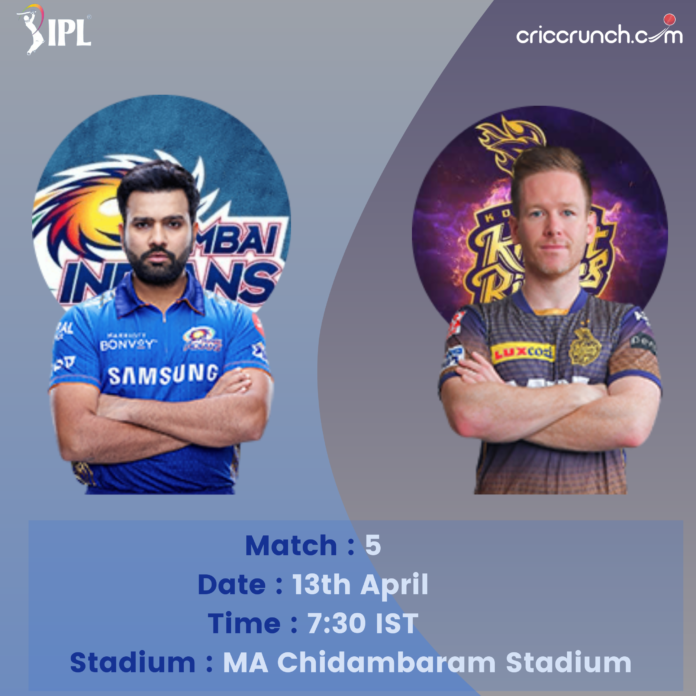 Another Epic Match of IPL 2021 season with Mumbai Indians great comeback. Read more about the fifth match in the 2021 IPL season between MI vs KKR (Mumbai Indians vs Kolkata Knight Riders).

KKR chose to bowl first after winning the toss.

Harbhajan Singh from the KKR team started the match.

Quinton De Knock was soon dismissed on the last ball by Varun Chakravarthy in the second over.

MI was at a score of 42 runs by the loss of one wicket after six overs.

With a score of 56 and a helicopter flick for SIX, Surya departs from the ground after making everyone stunned with his performance.

MI reached 81/1 in ten overs but soon after the loss of three players Ishan, Hardik, and Pollard, KKR came in full control by dominating MI’s Batsman.

The situation was out of control for MI with the entry of Andre Russell.

And it’s the End of the First innings with a total score of 152 runs in 20 overs for MI.

Andree Russell scored a total of five wickets which includes three in the last over of the inning.

Apart from captain Rohit Sharma and Surya Kumar Yadav, no other batsman could get going.

It’s now the beginning of the second innings and an exciting run chase by KKR.

Nitish Rana and Shubham Gill started very well and reached a combined score of 19 runs with no wicket loss in the first three overs.

Captain Eon Margin was sent back to the pavilion and Nitish Rana Scored his second 50 of this season IPL 2021.

Rahul Chahar(spinner) did the maximum damage to MI and produced his best bowling performance in the IPL till now.

He ended his spell with a total of 4 wickets.

Bumrah did a very good spell in the 19th over by giving very few runs and some dot balls.

Trent Boult in his last over gave very good deliveries with only 2 runs in 2 balls.

The match here is getting very intense.

Russel was playing under pressure and boom he is GONE, Russell is Gone…..!!!!

KKR is now on an impossible target of 13 runs on 2 balls but it’s clearly a win for MI as Cummins got clean Bowled on the very next ball.

Mumbai Indians won the match by 10 runs and played well with the team’s efforts.

MAIN HIGHLIGHTS OF THE MATCH :

Most Sixes by Suryakumar Yadav(MI) and Nitish Rana (KKR) 2 sixes each.