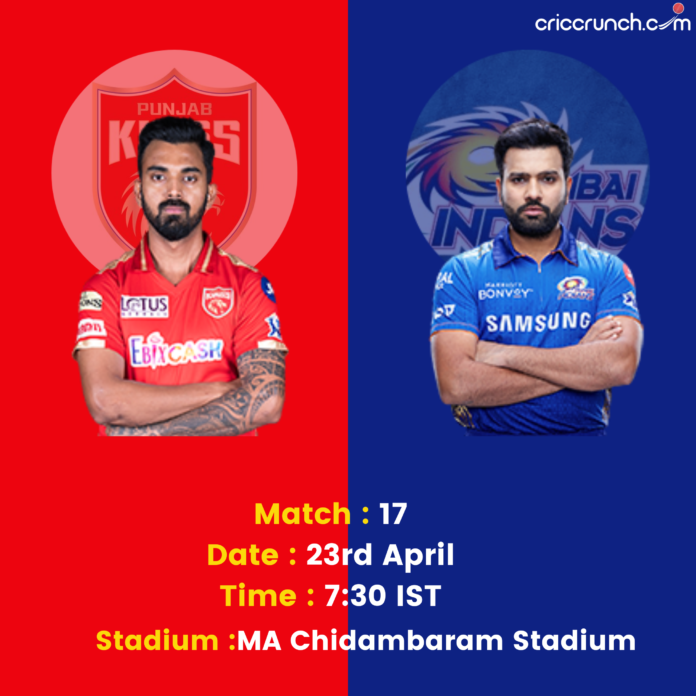 5 times title champion – Mumbai Indians ,with slow start are looking for consecutive wins to move up on Points table. Punjab Kings on the other hand is on 2nd from bottom in the list and is looking for a win after 3 consecutive losses. Let’s check MI vs PBKS Highlights from yesterday.

Punjab Kings decided to field first on winning the toss.

First Innings starts: de knock and Rohit Sharma from Mumbai indians on the bat with de knock on strike and Henriques to open the attack.

It was a slow start with very few runs and no runs in many delieveries.de knocks was soon caught out by Henrique in the second over by Deepak Hooda.

Ishan Kishan joined the crease in the third over which was quite shocking as generally, it’s Suryakumar Yadav’s turn.

MI didn’t manage to get any boundary after the finish of powerplay over and after 6 overs Team was only a score of 21 runs with the loss of 1 wicket.

And once again a Wicket !!.. Ishan Kishan was caught out by Rahul on the ball of Ravi Bishnoi.

Rohit Sharma, started slow and continued to follow the same pattern as the pitch was not good for batting.

They both had a good partnership till the next 10 overs which gave good stability to the team.

In the 17th Over Suryakumar was caught out by chris Gayle on the very first ball breaking the solid partnership of 79 runs.

Rohit Sharma after his wonderful innings and fifty got caught Out by Fabian on Shami’s over.

He managed to give a good score of 63 runs on 52 balls which helped in stabilising the team score.

It’s Hardik on the crease but his performance was disappointing similar to his previous matches of this season.

He was out on the fourth ball by Arshdeep Singh.

Krunal who joins after him too got out soon.

Both Pandya brothers gave their worst performance in this season IPL.

It was only Kieron who managed to get major runs after Rohit’s wicket.

With a Total Score of 131 runs and 6 wickets after 20 overs.MI can only depend on good batting to win this match.

It was a good start by Punjab kings.

Both Rahul and Mayank managed to get a good score of 40 runs after 5 overs.

After a good partnership and stablishing the match for Punjab in early overs Mayank got caught out by Suryakumar Yadav on the second ball of 8th over by Rahul Chahar.

PBKS at a good score of 56 runs in 8 overs with a loss of one wicket.

With his wonderful innings and great boundaries, Chris was rocking the crease.

They both, Kl Rahul* and Chris Gayle with their amazing partnership helped the team to finish and win the match in just 17.4 overs.

PBKS won the match by 9 wickets.