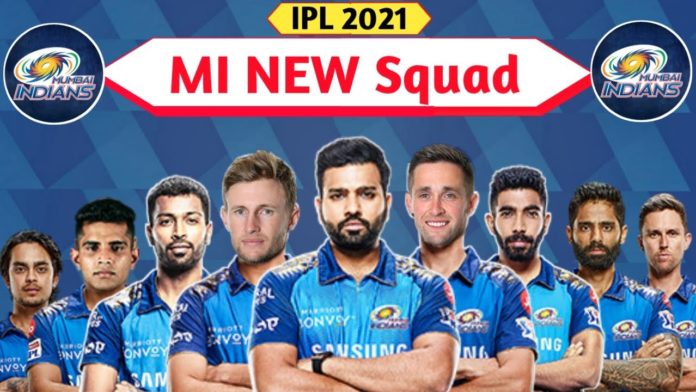 Mumbai Indians is the most successful team in the history of the Indian Premier League or IPL. The Mumbai Indians have won five IPL trophies in 2013, 2015, 2017, 2019 and 2020. This article will tell you all about the Mumbai Indian Team ,Schedule IPL 2021 and their top players.

MI will play the first match of IPL on 9 April 2021 against Royal Challengers Bangalore at Chennai. The first five matches Mumbai Indians will play in Chennai and four in Delhi. The team will finish with three matches in Bengaluru followed by two in Kolkata.

Rohit Sharma is the captain of Mumbai Indians. The 33-year-old player from Mumbai has been with the franchise since 2011. Rohit has 5 IPL titles for the team, which is the most by any captain in IPL.

Kieron Pollard, the Trinidadian cricketer and an all-rounder for the Mumbai Indians squad needs no introduction. Recently he became the third batsmen to score six sixes in an over against Sri-Lanka.

Hardik Pandya is a fast-bowler and all-rounder who has performed best in every IPL match. Since his debut in 2015, Pandya has been Mumbai Indian’s go-to guy in difficult situations.

Jasprit Bumrah a fast bowler of Mumbai Indians, his yorker ball is unmatched in cricket. He has become the ideal bowler for Mumbai Indians after the departure of Lasith Maliga.

Ishan Kishan is a proper batsman who can play cricketing shots as well as use unconventional methods to dominate the bowlers. His recent innings in the second T20 against England was helpful for India in winning the match.

Upcoming Challenges For The Indian Cricket Team in Australia