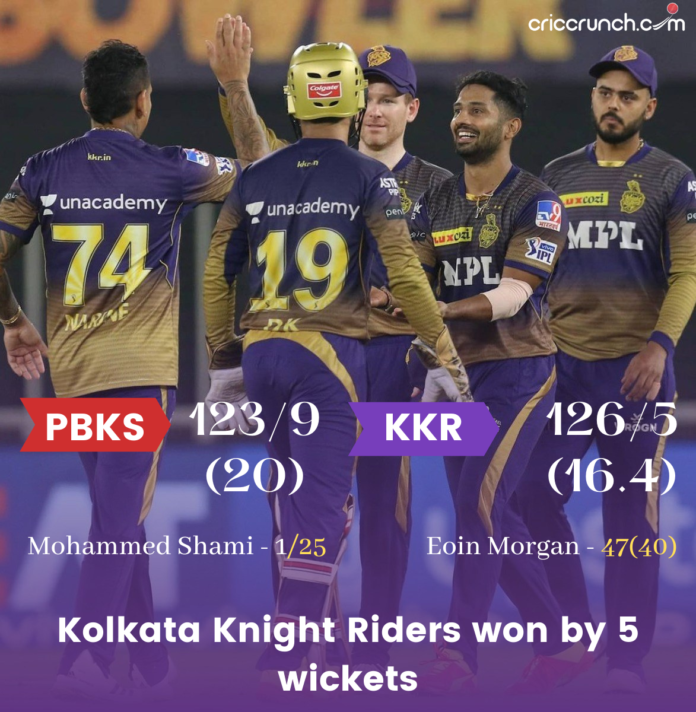 Insights from yesterday’s Match of this season’s IPL between PBKS VS KKR are quite interesting.

Without much delay Let’s get started with Punjab Kings Vs Kolkata Knight Riders Match Review.

Updates of the match.

TOSS TIME- KKR won the toss and chose to Bowl.

Kl Rahul and Mayank Aggarwal on the crease with Shivam Mavi to open the attack.

A slow start and a wicket by Cummins.PBKS is at a score of 37/1 with the end of Powerplay.

Captain Rahul was caught out.

A cracking spell by Mavi again in the seventh over and it’s Gayle now..!! caught by Karthik, a big loss to the KKR team in early overs.

Seems KKR is in a rush to bat….it’s another wicket of Hooda and the Score reaches 44/3 after 8 overs.

Three major wickets back to back added much peer pressure on the players.

The game is going on the KKR side with one more wicket gone in the 12th over.

Mayank is sent on his way back to the Pavilion by Sunil Narine.

And Sunil with his impressive bowling took one more wicket of Henriques just after one over.

Punjab’s score after this loss and end of 14 overs is 78 runs with loss of 5 wickets.

Pressure getting worse from here and it’s one more wicket of Pooran in the sixteenth over.

And it’s the end of the first innings with their score reaching 123 runs and loss of 9 wickets in 20 overs.

Openers Nitish Rana and Shubham Gill on the crease.

Henriques up with the ball from PBKS.

What an opening!!! Rana on the very first ball is caught out by Shahrukh…

It’s an early exit for Gill as Shami traps him in the second over which sends him back to the pavilion.

KKR at the end of second over 10 runs and 2 wickets.

Seems magic is doing its work as it’s one more loss to the KKR .Stunning catch it is…Narine caught out in the third over by Ravi Bishnoi on ball by Arshdeep Singh.

And few boundaries in pocket Kolkata ends powerplay with sweet- bitter feelings and score of 42/3 after 6 overs.

Seems KKR is settling back well in the game with Morgan grooving for the chase.

A good 50-run partnership by Morgan and Tripathi helped KKR reach a score of 68 runs after 9 overs and loss of 3 wickets.

A great achievement for Morgan as he completes his 7000 T20 runs.

Game slipped from Punjab hands as KKR was adding good runs in his pocket.

With few wicket losses in between overs KKR team played and dusted the match in just 16.4 overs.

Final Score of Both the Teams