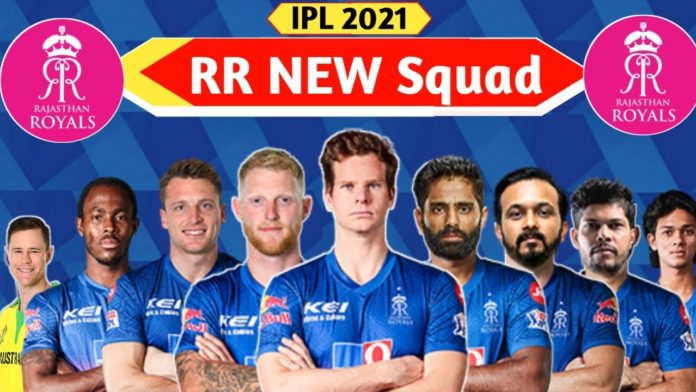 Indian Premier League 2021 is all set to kick-off from 9th April 2021. The Rajasthan Royals is the one-time winner of IPL in 2008. Their first match of the 14th season will be against Punjab Kings on April 12th in Mumbai. This article consists of Rajasthan Royals Team and Schedule  IPL 2021.

Rajasthan Royals made a big decision ahead of IPL 2021 in player auction, as they released their former captain Steve Smith. They will now have a new captain Sanju Samson, to lead the team consisting of some prominent overseas players like Jofra Archer, Ben Stokes and Jos Buttler.

Rajasthan Royals made South African all-rounder Chris Morris the most expensive buy-in IPL history after roping him for Rs.16.25 crore.

Rajasthan Royals Team Schedule IPL 2021: will start with five matches in Mumbai and then move on to Delhi for four matches. The next three matches will be played in Kolkata and will conclude at the group phase just as they started with the match against Punjab Kings. The last two matches of Rajasthan Royals will be held in Bengaluru.

The new addition to the Rajasthan Royals squad for IPL 2021 is Chris Morris, Shivam Dube, Mustafizur Rahman, Liam Livingstone, Chetan Sakariya, KC Cariappa, Kuldip Yadav and Akash Singh. Rajasthan Royals has some big names in their squad and they will be eyeing to showcase a much better performance in the forthcoming IPL 14th edition.

Sanju Samson at number 3 will give Rajasthan Royal a formidable top order, capable of destroying any bowling attack on their way.

Riyan Parag, Chris Morris, Shivam Dube and Rahul Tewatia are the middle order for the Rajasthan Royals. They have plenty of all-rounders in the squad.

Karthik Tyagi, Jofra Archer, Jaydev Unadkat, and Shreyas Gopal are the best bowlers from the Rajasthan Royals. The bowling attack will be spearheaded by none other than Jofra Archer.

This was the full Rajasthan Royals Team and Schedule IPL 2021. Let’s see how RR will perform this IPL.