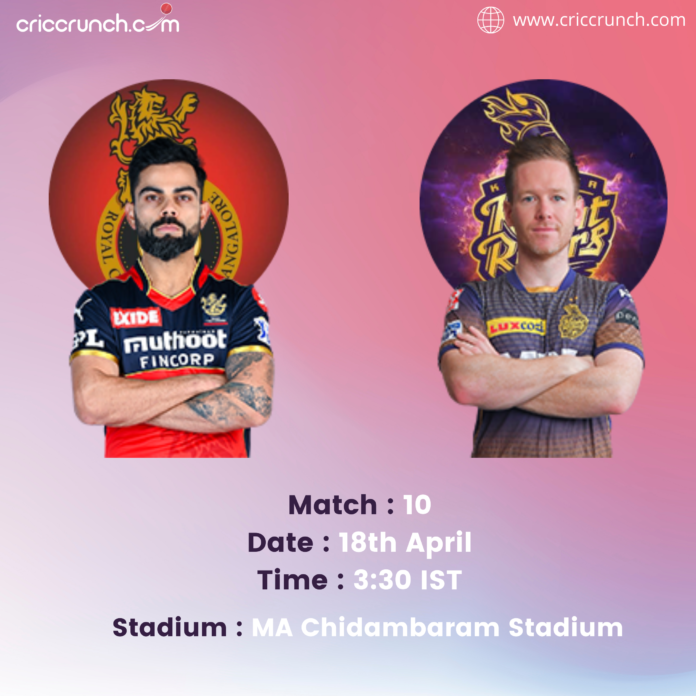 It was a Super Sunday indeed! Two matches were played, both were super entertaining.

After a sad loss to Mumbai Indians, KKR was looking for a win against RCB, which are currently the table toppers. On the other side, RCB was looking for their third straight win.

Let’s have a look back at the game from yesterday.

Virat Kohli and Devdutt Padikkal opened the innings. KKR decided to open the attack by spin, Harbhajan Singh bowled the first over.

In the 2nd over, Varun Chakravarthy got the wickets of Kohli and Patidar. RCB was stunned twice early in the game, and KKR relished the opportunity.

KKR’s strategy of beginning with spin has paid off handsomely. It seemed to be another challenging pitch to bat.

It was all dependent on Maxwell and Padikkal to pace up the innings.

Even after an early double blow, RCB made a smart recovery in the powerplay. Maxwell was looking great, and Padikkal held on the other end. At the end of the powerplay, RCB scored 46/2.

Maxwell and Padikkal made a 50 runs partnership, Maxwell being dominant.

Glenn Maxwell was looking for a target of 200+ runs. A special knock from a spectacular player, a 28-ball half-century.

Soon after, when Padikkal got out, AB de Villiers comes to bat.

Maxwell and AB de Villiers made a quick partnership of 50 runs.

In the 17the over, Maxwell got out. Maxwell remarkable knock comes to an end.

Andre Russell, with a two-over spell, gave 38 runs. Certainly, it was a poor decision from KKR at the end of the innings.

AB de Villiers finishes off the innings by making 76 runs in just 34 balls.

Didn't he just come in to bat?🤷‍♂️

The chase begins with Nitish Rana and Shubman Gill. Siraj set the pace.

Who would expect an early wicket of KKR in the second over? Well, Shubman Gill was trying to maximize the powerplay, but what a loss of quick innings of 21 runs in 9 balls.

KKR made 57 runs at a loss of 2 wickets in their powerplay.

Yuzvendra Chahal took the first wicket of IPL 2021 by sending Nitish Rana to the dugout.

After the dismissal of Dinesh Karthik, Eoin Morgan and Shakib paddled the innings, but the asking rate was getting higher. Someone needs to pace the innings to reach the target.

And it was OUT! Andre Russell took the fight and gave few hits but could not prevail for long.

KKR put in a valiant effort, but they kept losing wickets, and no one batted for an extended period.

It was a hat-trick for RCB with a resounding victory.

Did you know what happened in MI vs SRH 9th Match