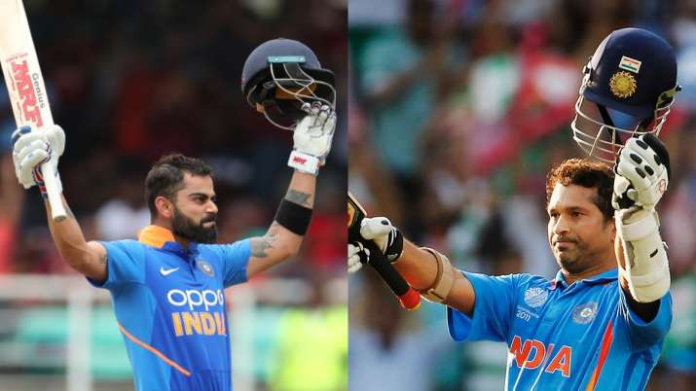 Cricket comprises skills, tactics, passion, history, emotions and many other things. It is celebrated as a festival in India, and in festivals we worship Gods.

These two superstars have ruled the bowling attacks of their respective times. Also, both of them have taken Indian cricket to new heights unbeatable by any other cricketer.

But who is greater among the two? Is Virat Kohli better than Sachin Tendulkar? or Not?

We compared their stats and performance in this article to check who is better, Sachin Tendulkar or Virat Kohli?

Sachin Tendulkar is the name that continues to inspire cricketers and cricket fans, not only in India but all over the world.

Tendulkar has a very special place in the hearts of cricket fans. He is the only batsman in the world who is compared to God.

Sachin Tendulkar has been the single biggest factor behind the popularity of cricket in India.

He has led the Indian Cricket team to a new high and inspired cricketers like Virat Kohli, Kedar Jadhav and many new cricketers.

Sachin Tendulkar has many records under his name – the only player to have scored 100 international centuries, the first batsman to score a double century in an ODI, the holder of the record for most runs in both Test and ODI cricket and the player to complete more than 30,000 runs in international cricket.

Virat Kohli is the current captain of the Indian National cricket team. Kohli is regarded as one of the best modern-day contemporary batsmen in the world. Kohli got to fame after leading India to glory in the under-19 World Cup at Kuala Lumpur in 2008.

Delhi-born Kohli has already eclipsed some of Tendulkar’s records and has plenty of time to overhaul more. After India’s 2011 World Cup win, in which Virat Kohli played a great role with his teammate Gautam Gambhir by pulling a rescue effort with the 83 run stand after losing the openers early, this knock played a crucial role in setting the platform for MS Dhoni fabled knock of 91*, which eventually won India the World Cup.

After the World Cup, Kohli has continued to take giant strides in the limited-overs formats- T20, ODI and Tests. Kohli has a seemingly hot head on his shoulder but he channels all his anger while he is batting, known to be an aggressive batsman he always looks out for runs.

Also, recently Kohli became the first cricketer in the world to reach a hundred million followers on a social platform – Instagram.

In the list of 15 greatest batsmen of all time, Virat Kohli didn’t even make it into the list. However, Tendulkar was placed second and the top was Donald Bradman.

Whereas Virat Kohli is a more famous name than Sachin Tendulkar in IPL which is one of the top 10 cricket leagues in the world.

But cricket has evolved enormously over the years. Initially, the number of opponents was limited, test cricket was the only form of international competition, pitch conditions were different and rules were also changing. Today there are many more formats of cricket and also powerplay has changed.

Tendulkar’s average was achieved over an incredible 200 test matches while Kohli has by far played 91 times in test format.

Considering all the facts let’s not forget Sachin Tendulkar played in a different era where pitch conditions ruled and the quality of bowlers, everything was different when you compare with today’s era.

People argue about the quality of bowlers in the Sachin era, it was better than the current generation of bowlers. Today the rules have become more batsmen friendly. So, they consider Sachin Tendulkar Better Than Virat Kohli.

But in Virat’s favour, one can argue that no other batsmen are dominating all three formats of cricket as he is. It requires a great level of fitness just to play all the formats of the game, let alone dominating the game.

In conclusion, Sachin is one the greatest batsman, the game has ever seen and Virat is surely the modern-day cricket greatest batsman and let’s wait till he finishes his cricketing career, to decide Who is Better Player – Sachin Tendulkar or Virat Kohli?