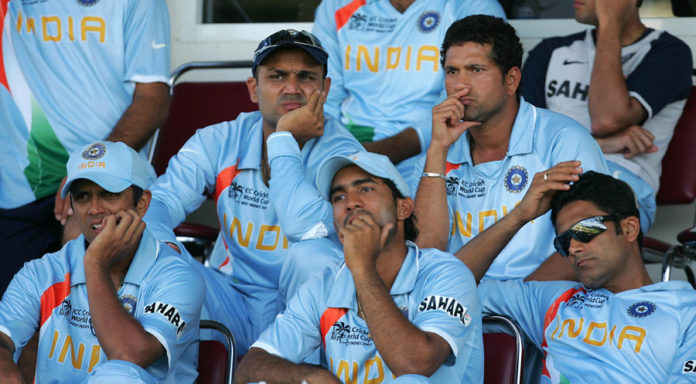 Indians are obsessed with cricket. Cricket reached the country when Britishers came to India. The team made its Test cricket debut in 1931. The first cricket club in India was set up in 1792. However, it was only in 1952 that the country won a Test match. From streets to premium clubs, cricket is played in every part of this country. India has witnessed some of the best cricket players in the world.

India won the Cricket World Cup in 1983 and the ICC World T20 championship in 2007. In 2009, the indian cricket team was named number one in ICC Test rankings.In 2002, SriLanka and India were the joint winners of ICC Champions Trophy. The Indian cricket team has reached Asia Cup finals eight times and has won five times.Our cricket team lifted the Hero Cup in 1993.

The cricket team has witnessed match fixing scandals to losing crucial matches. Most times, the excitement of millions of fans gets decelerated due to minor issues. A small news article of the cricket team receives instant response on social media.  Let us look at a few of the Saddest Incidents In Indian Cricket History.

The 1996 World Cup semi finals took place at Eden gardens.When the match started , Kaluwitharana and Jayasuriya were out with the score of 1 on the board. The Indian cricket team was lucky to gain their wicket as the two players were a dreaded pair.Sri Lanka scored 251 and Indian players were left with a target of 252 runs.The second inning started and India had a great beginning with 98 runs for one wicket in 20 overs. The team relied on  Sachin Tendulkar to further accelerate the match.

However, the entire country was shocked when Sachin was stumped at 65 runs. Indian wickets started dropping disastrously once Tendulkar was out. Indians were reduced to 120/8 and the fans were upset. They started throwing bottles, cans, plastic bags on the playing field. The Sri Lankan players refused to come on the ground seeing this negativity. Clive Loyd who was the match referee awarded the match to Sri Lanka. Seeing a tearful Vinod Kambli at the 1996 World cup semi-finals against Sri Lanka was heartbreaking for all.

India was playing against West Indies on June 16th, 2013. The teams were playing a two test match series at Wankhede Stadium. Everyone present there knew that it was Sachin Tendulkar’s last match. The fans applauded for a last century from one of the best players in Cricket history. Sadly, Tendulkar could not complete his century that day. Narsingh Deonarine took Tendulkar’s wicket at 74 runs. Even though the God of cricket could not score a century; the match featured some of his best gameplays.

As he left the cricket ground, he went back to the pitch and touched the ground. Edwards and Gayle from the West Indies team said that they could not hold back their tears as they saw Tendulkar walk away for the last time.

I know I have met so many guys who have fasted for me, prayed for me, done so much for me. Without that life wouldn’t have been like this for me. I want to thank you from the bottom of my heart, and also say that time has flown by rather quickly, but the memories you have left with me will always be with me forever and ever, especially “Sachin, Sachin” which will reverberate in my ears till I stop breathing. Thank you very much. Saddest Incidents In Indian Cricket History.

If I have missed out on saying something, I hope you understand. Goodbye.

On April 7th 2000, Delhi police charged South African cricketer, Hansie Cronje with match fixing charges in ODI against India. Delhi police also released a conversation transcript between a bookie and Cronje. On 8th April, the United Cricket Board of South Africa denied that their players were involved in any charges like these. Finally, after a lot of inquiry by the police and BCCI; Cronje released his connections with various bookies. Saddest Incidents In Indian Cricket History.

He was introduced to Mukesh Gupta by Mohammad Azaruddin in 1996 at Kanpur. Gupta had given Cronje $30000 to force the South African team to lose wickets on the last day.

Afterwards, Cronje was contacted by Marlon Aronstam in the 2000 Centurion Test match and offered $50,000. The Delhi police filed a formal complaint against Cronje and other South African players in 2000.Mohammed Azharuddin, the former India captain and one of world cricket’s finest batsmen, was banned from the sport for life.

Many Indian players like Kapil Dev and other prominent players were charged with many claims of match fixing. Indian cricket fans were upset and trolled each player and every match. However, the performance of India in the champions trophy helped cricket in India retain its position.

The 2003 World Cup was a sad sight for Indian fans all over the world. It was devastating to see the team lose to Australia after such a spectacular group stage and quarter-finals play at the Wanderers Stadium in Johannesburg. The Indian team consisted of some of the best players like Sachin, Sehwag, Ganguly, Dravid and many who deserved to win the world cup. Saddest Incidents In Indian Cricket History.

The World Cup 2003 finals were held on 23rd March, 2003. Indian cricket had started to win many accolades in International cricket since 2000 under Ganguly’s captaincy. The World cup series started on a devastating note for India but the team picked up pace and reached the finals. India won the toss and chose to field. Indian bowlers did not charm the spectators in any way. Anil Kumble’s absence from the finals has been a mystery to many. Saddest Incidents In Indian Cricket History.

Australians set a target of 360 in 50 overs. Indian fans expected a brilliant gameplay from Tendular and Ganguly. Apart from Ganguly’s 82 off 81 balls; no other batsman could impress the spectators. The Indian cricket team lost by 125 runs. This was the biggest gap between two qualifying teams in World Cup finals.

The 2007 World Cup was hosted by the West Indies. Despite the high potential Indian cricket squad, the team could not go past the group stage. India started the series with a loss against Bangladesh on 17th March, 2007.India chose to bat first but could score only 191 runs.Ganguly scored the most runs – 66 off 129 balls. Yuvraj Singh also put up a good performance by scoring 47 off 58 balls. Saddest Incidents In Indian Cricket History.

Next, the men in blue scored 413/5 against Bermuda. In return, Bermuda could score only 156 runs. India needed to beat Sri Lanka in the last group match to qualify for the Super eight stage. The Indian team could not beat the 255 target of Sri Lanka. The win against Bermuda was an epic record for the highest team total in a World Cup game. Apart from this score, the Indian cricket team did not gain anything from the entire series and was disqualified in the group stage itself.

MS Dhoni, one of the most loved skippers of the Indian cricket team announced his retirement on 15th August 2020. The entire country was shocked with this unexpected news. Mahendra Singh Dhoni had led India to a victory in three global ICC tournaments.

Seven months after lifting the 2011 World Cup, Indian cricket fans were devastated with the news of Yuvraj Singh’s lung cancer. The brave cricketer later admitted that he was subjected to cancerous symptoms even before the ICC World Cup series. He was vomiting blood during India’s tour of South Africa in January 2011.  Fans all over the world supported the brilliant player with prayers for a speedy recovery. In 2012, the cricketer underwent three chemotherapy cycles in the United States.By August 2012, he had returned back to the field.