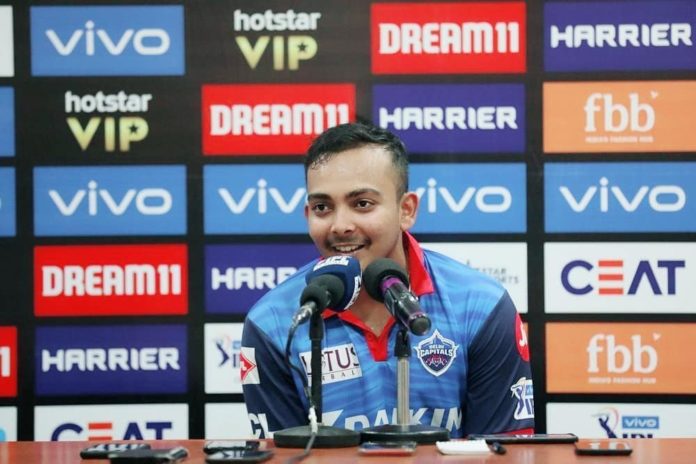 Indian batsman Prithvi Shaw is currently going through a rough patch in his recently-started international career. His place in the team for the upcoming Boxing Day Test against Australia is on the line after he gave a disappointing performance with the bat in Adelaide.

Prithvi Shaw managed to score just four runs in the Test Match of India-Australia. The match was played in Adelaide.

India’s one of the youngest opening batsmen, Prithvi Shaw, is under major scrutiny after his awful outing in the first pink-ball Test. Out of the four-match Border Gavaskar Trophy against Australia at Adelaide Oval. Most of the Indian batsmen played badly on the Adelaide pitch as the Australian team defeated the Indian Team to a sad defeat by 8wickets.

But Prithvi Shaw’s faulty technique and similar mode of dismissals in both the innings made him THE most vulnerable in the Indian batting line-up. The 21-year-old batsman’s selection for the opening Test had already raised a lot of eyebrows since he had failed to perform in the two warm-up games and, so many believed that Shubman Gill or KL Rahul should be given a chance to open the batting for India.

Unfortunately, Prithvi Shaw failed to perform well and, his failures in both the innings have made things worse for him. He is constantly being trolled and criticized social media. In the first innings, Prithvi Shaw had to go back to the pavilion. It happened in the very first over of the match after scoring a duck. The right-handed batsman had attempted to play a wide delivery from Mitchell Starc only to find himself inside an edge on to his middle stump.

It looks like fate is not with Prithvi Shaw.

Something similar happened with the batsman in the second innings too. He managed to score ONLY four runs off as many balls before he fell victim to fast bowler Pat Cummins.

A few of the cricket analysts, including Shane Warne and Sunil Gavaskar, questioned the batting techniques of Prithvi Shaw after seeing the dismissals of the young Indian batsman against the Australian bowlers. They said that if he continues to play so, he is bound to struggle at the international level.

After being trolled and targeted on social media for his poor form with the willow, Prithvi had enough and came up with a motivating status. He uploaded a story to give a befitting reply to all the haters. The 21-year-old took to his official Instagram handle to post a story that read, If sometimes people demotivate you for something you try to do, that means you can do that but, they can not.

As of now, Prithvi Shaw has featured in only 5games for the Indian team in Whites. But, he has amassed a whopping 339 runs at a stunning average of 42.4.

You can do that but they can’t. Prithvi Shaw posts a touching message after his Adelaide failures.

The 21-year-old returned with scores 0 and 4 in the opening game of the 4-match series against Australia. He also faced the wrath of fans. He got trolled for dropping a sitter off Marnus Labuschagne in Australia’s first innings.

A couple of days ago, the former Indian opener Wasim Jaffer tweeted a heart-warming meme to encourage Shaw. He wrote, “Chin up @PrithviShaw #AUSvIND.”

Before the Test series, Prithvi also struggled in both of the practice games. He returned with scores of 0, 19, 40, and 3 in four innings, respectively. But, he still got favoured ahead of Shubman Gill for the pink-ball Test.

So far, Prithvi Shaw has played five Tests and scored 339 runs at an average of 42.4. But that being said, his recent form has led to many question marks over his inclusion in the upcoming Boxing Day Test against Australia. The test match starts on December 26 to be played in Melbourne.

There are high chances that he might get replaced by Shubman Gill. Gill scored a half-century in the second warm-up game against Australia A. The team management would look to fill the gaps after skipper Kohli left on paternity leave and pacer Mohammed Shami ruled off the series with a fractured arm.

For someone who marked his Team India debut with a brilliant hundred, Prithvi Shaw currently looks like a pale shadow of the promising young batsman. He managed to capture the imagination of fans initially but, now the same fans are disappointed. After a dismal outing in IPL 2020, the right-handed batsman cannot seem to shake off his rusty form as failures continue to follow him Down under.

The right-hander had expected to lose his opening spot after giving a mediocre performance in the warm-up matches. But, the Indian team management persisting with him, Shaw could not do much in the 1st Test against Australia to repay their faith. He bowled in both the innings. He came back with the disappointing scores of 0 and 4. He failed miserably in negating the challenge of the Australian team quicks.

He fell prey to in-swingers, with poor footwork spelling his doom, on both occasions, and attracted criticism from cricket fans and pundits alike. Social media was abuzz with calls, from Indian cricket fans, for his axing getting stronger. After all the criticism the 21-year-old gave everyone a rare glimpse of his champion mindset with a cryptic post on social media.

Answering his critics with an Instagram story, he shared a motivational quote which read, If sometimes people demotivate you for something you try to do, that means you can do that but, they can’t.

Talking about Shaw’s struggles, Delhi Capitals coach Ricky Ponting highlighted a key weakness in the Indian opener’s batting. “You can see that he is trying to make a slight adjustment in the second innings, the gap is not as big, but the problem and the worry are that his front foot is not planted. His front foot is still in the air. He is late on the ball, he is late moving his weight into the ball.”

“If he gets a full stride over there, that eliminates that gap between pad and bat. You can see his foot off the ground. He makes about three movements with his front foot but, his front foot does not go anywhere,” the Oz legend added.

He has played only five Tests so far and has amassed 339 runs at a highly respectable average of 42.4. But, his recent form — his highest score on the ongoing tour has been 40, in a warm-up match, and he failed to reach double digits in most of the matches for Delhi Capitals in the second half of the IPL season. Because of this, he has led many question marks over whether he will be played in the 2nd Test vs. Australia.

It would not hurt to be nice once in a while. All of us hit rough patches and, at that time, all we need is motivation and support. Cricket is the most loved sport in India and, because of that, the players are constantly in the eyes of the public. We make them our gods and then diss them if they fail. It is sad seeing people lash out over these people, who are humans too. Be a little nice and humble. They are in that position for a reason. Just because one is going through a rough patch does not mean that you have the right to kick them when they are down.

He is just 21 and made it to the Day and Night Test match. That is a huge thing in itself. So be nice and humble and appreciate what people do.