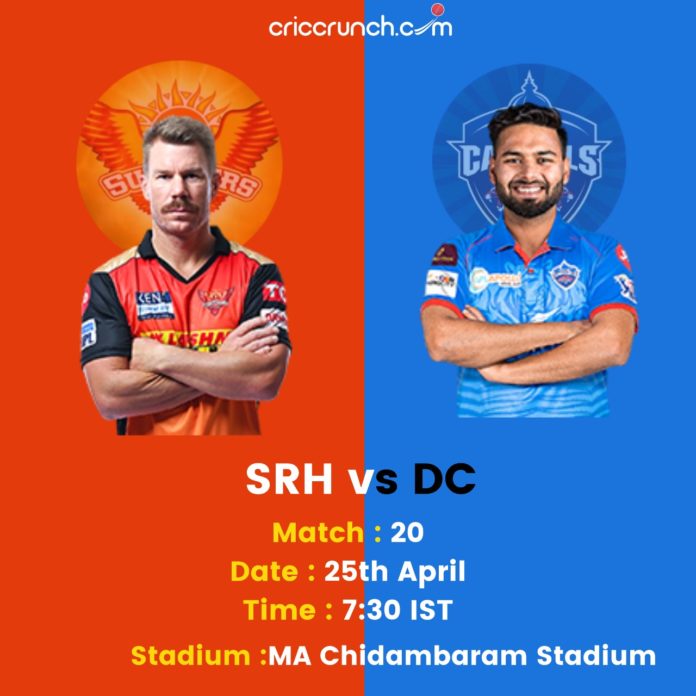 After beating MI, Delhi Capitals are looking more confident than last year. DC needs to work on its strategy to remain in the top 4 positions. On the other hand, SRH would be eager to gain some grip to progress up the points table.

Let us take a look at yesterday’s match.

Toss: Delhi Capitals won the toss and opted to bat.

Prithvi Shaw and Shikhar Dhawan opened the innings for DC. Khaleel Ahmed opened the bowling from the SRH side.

Prithvi Shaw was optimizing the power play at a rapid run rate. He was setting a strong base for DC.

A 50 runs partnership made between the two openers. Delhi was off to a great start.

Dhawan got out in the 11th over. Soon Prithvi Shaw also got out after making a half-century.

The pitch is getting slower. It was looking hard to make runs at a rapid rate. Pant and Smith both held the innings and made 50 runs partnership.

In the end, Smith played a few shots, which provided Delhi with a defendable total.

An early blow happened for SRH when Warner got run out by Rabada-Pant. Poor judgment from both of the openers was not needed at that time.

Like Prithivi, Bairstow was going guns blazing in the powerplay. But Avesh Khan got the best of him in the 6th over. Bairstow made 38 runs in just 18 balls.

Kane Williamson was holding the innings on this slow pitch. He made half-century which was needed at that time. But SRH required someone to stay with Williamson.

16 runs were needed in the last over, but SRH only managed to tie the match, and Woohoo we got the first super over of this season.

Williamson and Warner were first to play, SRH made Seven runs in 6 balls.

DC decided to send Pant with Dhawan to chase the target of 8 runs. This was shocking as Prithivi played a brilliant inning.

1 run was needed in the last ball.

And Delhi survived the match by winning the Super-Over.

Man of the Match: Prithvi Shaw