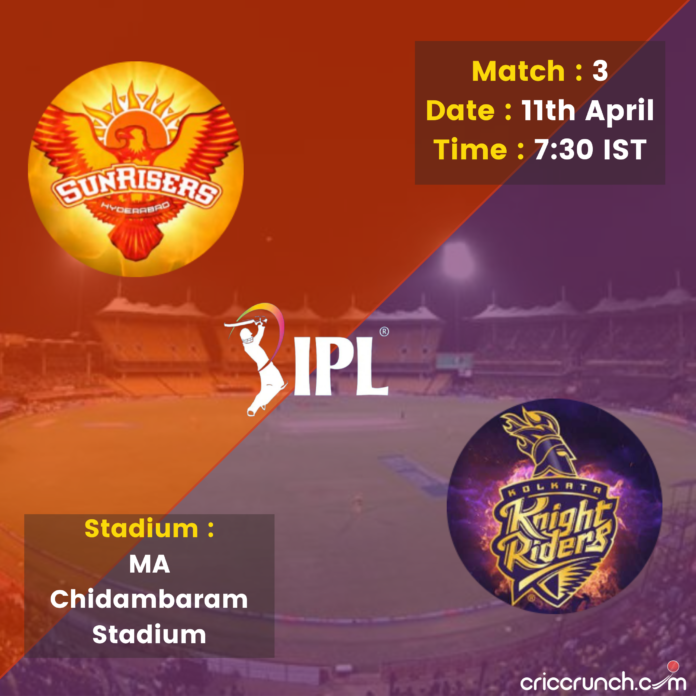 KKR was asked to bat by SRH on winning the toss and the action began with Nitish Rana and Shubham Gill to open the match with an interesting FOUR on full wide delivery by Bhuwneshwar.

This partnership reached 50 runs but ended soon with Googly by Rashid Khan.

This duo hit half-centuries and made the match comfortable for KKR.

But soon KKR lost its swing when all three Batsman Andree Russel, Nitin Rana, and Eoin Morgain were made their way back to the pavilion one after the other.

SRH was given a target of 188 runs to win this match.

The action on-field resumes with Wriddhiman Saha and Davin warner to open the match on the ball by Harbhajan Singh.

This duo dint played much and soon was sent off the ground with tragic runs and a score of 11/2.

Jonny Bairstow walked in and played a good partnership with Manish Pandey.

GREAT SHOT!- Jonny Bairstow reaches its half-century with a SIX on quick delivery by Varun Chakravarthy. It was indeed a nice shot.

Soon after got caught out on a short delivery by Cummins.

Russel gave his best to make KKR Win and on the other side Samad creamed off two sixes and a four off Cummins to keep SRH in the hunt.

Pandey continued the sole effort in hope of pulling off a tough win. He made a great shot to finish and it’s a SIX! But it all went into Vein.

It was indeed a great match with a dramatic start by SRH but a good chase given by Nitish Rana and Rahul Tripathi made it easy for KKR.

KKR wins the match by 10 Runs.

Man of the Match- Nitish Rana with 80 runs knock off.

Checkout the List of How Much Money is Nitish Rana Charging in Team KKR.

The Story of The Hitman: The Gem of An Opener For...