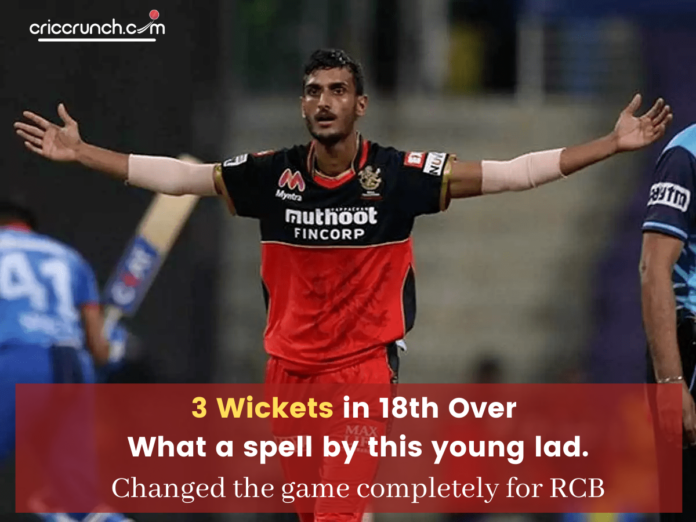 IPL 2021 has been really interesting so far, We have seen a bunch of performing players in every match.

Yesterday’s Match was also full of suspense till the last ball.

Virat Kohli and Devdutt Padikkal opened the innings for RCB.

Both openers were looking great at that time. But in the 3rd over Padikkal, got out as Bhuvneshwar kept his calm and got the first wicket of the match.

On the other end, Kohli slowly got runs on a slow pitch as other players were juggling to make runs.

Soon Kohli was out! As he struggled to convert his start into big innings.

Kohli and Maxwell built a partnership of 43 runs.

All hopes were on AB de Villiers to get his team a defendable total. But Rashid Khan’s magical bowling got the big fish for only one run.

One picture. Many emotions… 🧡 pic.twitter.com/zhCnl5KzSV

SRH is always a tough side when it comes to the bowling department.

A half-century by Glenn Maxwell after Five years in IPL, made RCB reach a total of 150.

Hyderabad boy Siraj got the early wicket of Saha. He was looking for a wicket at an early stage of the match by delivering such top-speed bowling.

David Warner is known for scoring the most runs against RCB in IPL. He continued to do that in this match also.

Manish Pandey and David Warner were cruising to the finish line at a rapid pace. SRH’s hope depends on this duo.

SRH Captain David Warner made fifty and made sure he had to bat till the end.

RCB got back in the game by clinching the wicket of David Warner, who made a partnership of 83 runs with Manish Pandey.

This game became more exciting when Shahbaz Ahmed took three wickets of SRH in a single over. Bairstow-Manish Pandey-Abdul Samad got out, and tempo was right back to RCB.

SRH required 16 in the last over.

In the end, Rashid Khan tried his best but couldn’t make it to the finish line.

Man of the Match – Glenn Maxwell

Did you like our SRH vs RCB Match Highlights done by our team criccrunch? Kindly give your reviews and ratings below.